Taoiseach says no EU ‘pot of money’ for transport projects 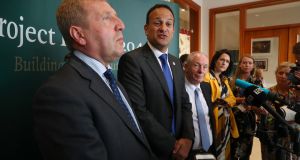 Taoiseach Leo Varadkar has said there “isn’t a pot of money” from Europe to develop transport projects and that roads have been prioritised over rail for the west coast in the Government’s Project Ireland 2040 plan.

Speaking in Westport, Co Mayo after a presentation on a €1 billion 10-year rural regeneration initiative, Mr Varadkar said the Government intended to honour its commitment to seek the reinstatement of the crossborder “western arc” as part of the EU’s trans-European (Ten-T) network funding programme.

During his time as minister for transport in 2011, Mr Varadkar deleted a key west coast transport element from the Ten-T programme, effectively excluding transport projects north of Limerick from qualifying for the EU funding before 2030. This was done in spite of a warning from former MEP Jim Higgins.

“If you include something on the core network of Ten-T, you have to build it and you might get a bit of money from the European Union for it,” Mr Varadkar said on Friday, adding that there was a “misperception” about how EU funding works.

The Taoiseach said there “isn’t a pot of European money to invest in Irish roads and railways anymore”.

“The chances are that the projects that get funding are ones that are trans-European, ones that are cross-border projects, for example ports and airports.”

He noted plans to upgrade roads between Castlebar and Westport, Castlebar and Sligo as well as the Galway outer bypass and “improving the line speed on our existing railways” as priorities. He made no mention of extending the western rail corridor.

“We are going to be doing that because we decide to do it as an Irish Government and we will be doing it with Irish taxpayer’s money.”

Mr Varadkar, who was joined by Minister for Rural and Community Development Michael Ring and Minister for Agriculture Michael Creed, said an aim of the Project 2040 programme was to “rebalance growth” outside urban areas.

Targets in the plan include providing an additional 135,000 jobs outside the Dublin region by 2020, revitalising more than 600 towns and villages, supporting more than 4,000 community projects, doubling investment in flood relief works by 2021, and ensuring that all homes and businesses are connected to high-speed broadband.

Mr Varadkar referred to a painting in his office by Paul Henry, entitled Into the West, which had been there during the time of his predecessor, Enda Kenny. He said it was still there to remind him that he was Taoiseach for the whole country.

“That’s why I really dislike to see attempts we see so often to create a divide between rural and urban Ireland,”he said, adding that the results of the marriage equality and abortion referendums indicated there was no significant divide.

The Taoiseach said rural Ireland held much of the State’s natural capital, environmental and offshore assets, and 70 per cent of the workforce was outside Dublin. Some 65 per cent of new jobs announced last year were outside Dublin also, he said, and the largest single transport project in the State in the last seven years was the Gort-Tuam motorway.

Mr Varadkar forecast that 80 per cent of the population would have access to high-speed broadband by the end of this year and that the national broadband contract would be signed this autumn.

Mr Creed said he was unable to intervene in the threatened closure of a major fish processing factory in Rossaveal, Co Galway, which says it has been squeezed out of securing landings by Killybegs-based interests.

He said that under the EU Common Fisheries Policy, fish quotas are not linked to factories but to vessels. However, he said State agencies were in discussions in relations to support for the harbour. He noted a €4 million investment in a new marina in Rossaveal.

During a 10-minute question and answer session, Niall Garvey of Muintir na Tire said it was important that communities were allowed to identify their own needs. He asked if the Government would consider increasing funding under the Leader programme.

“I just hope the national media is here, because sadly every time we announce a good news story in rural Ireland it never gets reported,” he said.

Westport municipal town architect Simon Wall said that Ireland’s most successful rural towns – Westport and Clonakilty, Co Cork – had in common a resident town architect. He asked if this template could be used elsewhere.

“A good example should be followed,” Mr Varadkar replied. “What’s really important is the public realm.”

He referred to Malahide and Lucan in Dublin as being “attractive places”, whereas his home area of Blanchardstown was “higgledy piggeldy..and not a good public realm”.