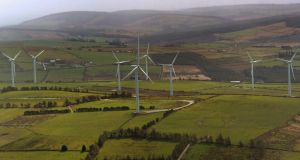 Dr Seán Healy, director of Social Justice Ireland: “Much of what Ireland is doing is damaging people, the economy or the environment.” Photograph: David Sleator

As one of the richest countries in the world, Ireland must do better and move faster than most to meet the UN sustainable development goals it has signed up to, according to Irish Congress of Trade Unions equality officer David Joyce.

“Ireland has the potential to be the best performer on every single goal by combining economic, social and environmental dimensions of sustainable development,” he said, but the Government’s report delivered to the UN on Tuesday showed it had “a long way to go in terms of leaving nobody behind.”

Ictu is one of more than 100 civil society and environmental groups which have rejected the Government’s review of progress on the goals, or SDGs; it has highlighted a lack of necessary policy actions, on top of slow implementation.

Speaking in New York, Suzanne Keating, chief executive of Dóchas, the Irish association of nongovernmental development organisations, said, “Much greater urgency and political leadership will be required if we are to ensure the transformative change that the SDGs envisage by 2030.

“The Government needed to prioritise and cost realistic targets and outcomes, and involve all stakeholders in the process,” she said. “Only then will we meet the ambition of the SDGs, which is to make sure that the needs of the poorest and most marginalised in society, at home and abroad, are met sustainably and for future generations.”

In its own report evaluating progress, Coalition 2030 calls for greater focus on developing national policies. “Arguably the greatest threat to Ireland’s implementation of the SDGs is a pronounced lack of policy coherence. Greater focus has to be placed on the inter linkages between the 17 goals which makes them so transformative.”

Shortcomings were manifest in Ireland’s poor record in reducing greenhouse gas emissions, failure to stem a downward spiral in biodiversity, and continuing inequality throughout Irish society, it concludes.

Ireland’s performance on implementing the goals “is particularly bad on environment and inequalities”, said Dr Seán Healy, director of Social Justice Ireland. “Much of what Ireland is doing is damaging people, the economy or the environment. Ireland needs much more committed action to build a future consistent with the SDGs . . .

“There were sufficient resources to ensure inequality could be tackled effectively and the social injustices of poverty, waiting lists and homelessness could be addressed. Priority should be given to reducing poverty, tackling the social housing crisis and reforming the healthcare system in both urban and rural Ireland.”

Valerie Duffy of the National Youth Council of Ireland said education for transformative change was also necessary. “We need education that enables all people to participate meaningfully, to critically engage in sustainable development, and to imagine and create new futures.”

The Green Party accused the Government of “greenwashing” its update to the UN. Its leader, Eamon Ryan, said failings in waste, climate, ocean protection and “global partnership targets” on overseas development spending and tax had to be faced up to.

On the 2018 country-by-country report on implementing the goals, Mr Ryan said: “This is the latest in a number of damning reports on Ireland’s record on environmental issues. Fine Gael have utterly failed in this area, and continue to stick to their old development model . . . They are the laggards who are damaging our international reputation. We need a new national plan that takes sustainability seriously.”