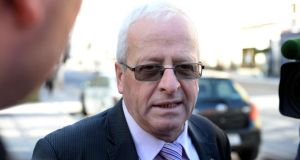 Tipperary TD Mattie McGrath and other Independent TDs have met with the Standards in Public Office Commission to discuss forming a new group ahead of the next general election. Photograph: Eric Luke

A number of Independent TDs are considering establishing a new political party or alliance to promote rural issues and an anti-abortion message.

Tipperary TD Mattie McGrath and Cork South West TD Michael Collins have confirmed they have met with the Standards in Public Office Commission about forming a new group ahead of the next general election.

The meeting focused on the viability of forming a new political party, which would oppose efforts to repeal the Eighth Amendment of the Constitution and to promote issues affecting rural Ireland including the new drink-driving legislation.

Those present at the meeting were advised on the logistics and practicalities of forming a party, including the necessity for gender quotas. The Independents felt it was better to examine an alliance, rather than an official party.

Mr McGrath told The Irish Times the discussions had stalled after Mr Grealish confirmed he is unwilling to participate. However, he said the option of creating a new alliance remained under serious consideration.

“There is a huge view not being represented in the Dáil. We have seen that with the Oireachtas Committee on the Eighth Amendment.

“We have been contacted by people all over the country urging us to put their view forward, not just the pro-life view but on rural matters too.”

Mr Collins also agreed there was scope for a new political party which seeks to protect rural Ireland and give a voice to those who feel neglected by the current administration.

The Cork South West TD said “all options remained open” and encouraged other members of the Dáil and Seanad to contact them to discuss possible avenues.

“There are a number of TDs and Senators who are dismayed at the actions taken by the Government and the anti-rural decisions that have been taken.

“We need to have a clear voice ahead of the upcoming referendum and the next general election. I think there is room for a party so we shall wait and see.”

Former Fianna Fáil senator John Hanafin confirmed to The Irish Times that he had been in discussions with the TDs but declined to give details about the nature of those conversations.

Mr Hanafin said he was willing to speak to “all pro-life TDs” about the “common purpose” they share.

Mr McGrath and Mr Collins are members a technical group in the Dáil to share speaking rights, and have the ability to question the Taoiseach during Leaders’ Questions.

The group also includes Mr Grealish, Mr Harty, the Healy-Rae brothers and Tipperary TD Michael Lowry. However, Mr Lowry was not asked to participate in the discussions on a new party.

The meetings began a number of months ago but stalled following Mr Grealish’s decision not to participate. The initial aim was to access resources to assist the group, in line with that of other political parties.

Clare TD Michael Harty also confirmed he was involved in the discussions but believed it was difficult for the group to develop into a political party due to the divergence of views.

Mr Harty said the idea was to mimic that of the Independents4Change, which is a registered political party but a loose alliance.

“My own assessment is that it would be difficult to come together with a common purpose. Even though we have rural, Independent TDs, we do not have an agreed platform.”