Miriam Lord: You can bank on Michael Lowry for a laugh 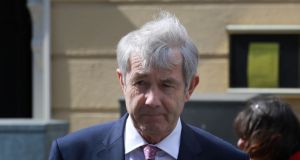 Tipperary TD Michael Lowry: his contribution to Leaders’ Questions will most certainly win gag of the week, if not the entire Dáil session. Photograph Nick Bradshaw

Say what you like about Michael Lowry – and Judge Michael Moriarty had a lot to say about the former minister whose department awarded a highly lucrative mobile phone licence to a businessman who just happened, in a roundabout way, to give that minister a shedload of money – but the guy has a sense of humour.

Gentle, ironic humour. The sort which suddenly makes you think, then shake your head, then smile, then chuckle and then laugh hysterically until you get very angry and hurl your copy of the Moriarty Report out the window and bang your head off the wall.

That kind of funny.

It was a slow burner of a joke, on a slow Dáil afternoon, but Lowry’s contribution to Leaders’ Questions will most certainly win gag of the week, if not the entire Dáil session.

The Tipperary TD, a once high-flying Fine Gael minister who is now part of the Rural Independents Group, doesn’t show his face very often in the chamber.

Occasionally, he turns up to make contributions on matters relating to his constituency, where he runs the formidable grassroots operation which has ensured his return to Leinster House election after election, despite a raft of damning revelations about his business and political dealings, the likes of which would have buried most politicians years ago.

In a number of adverse findings against the politician in his 2011 tribunal report, Judge Moriarty found “beyond doubt” that Michael Lowry imparted “substantive information” to Denis O’Brien which was “of significant value and assistance to him in securing the licence”.

Lowry and O’Brien didn’t accept the findings; they chose not to challenge them in court.

So Michael stands up yesterday with his two questions typed up on A4 paper. He has picked out the parts he wants to emphasise in lines of highlighter pink.

“I wish to raise concerns regarding the operation of the SBCI which was set up by this House under the Strategic Banking Corporation of Ireland Act 2014,” he began, reminding the Dáil that the corporation was established to help small and medium enterprises to get access to credit.

Now, whatever the judge decided about Lowry and his convoluted dealings (“disgraceful and insidious”), there is no doubt that the TD knows a thing or two about bank loans and bank accounts and how banks facilitate the movement of large amounts of dosh.

Lowry gave the Taoiseach a rundown on the huge amount of money over a billion, the sort of eye-watering figure only massively rich people like mobile phone moguls, for example, can comprehend – controlled by the SBCI. This money is then dispersed in large chunks to selected banks and finance companies, or “on lending partners”, and they are supposed to use it to supply loans on better terms to small enterprises.

Yesterday, Michael wanted to know what the banks are doing with these big wodges of SBCI money because he suspects they may be using it to beautify their balance sheets and feather different commercial nests.

One big problem he has identified is a lack of “transparency” in the process. He says the banks never produced projections as required by the initial rules from the SBCI. “This resulted in no transparency as to where the money was going and the purpose for which it was used in the banks.”

That’s when people began to smile, thinking of how Moriarty referred to Lowry’s “cynical and venal abuse of office” and his brazen refusal to acknowledge the impropriety of his financial arrangements with Denis O’Brien and former supermarket boss, Ben Dunne.

“There is unease over the lack of transparency of this scheme,” he added.

You had to laugh.

Memories of the time, long ago, when Lowry told the Dáil that if he had been trying to hide money, sure wouldn’t he have “put it in an offshore account?” The implication being that he didn’t have one. Then the tribunal found that he actually had at least four such accounts but hadn’t disclosed them to an earlier inquiry.

And the laughs kept coming.

It wasn’t just the transparency worries. “There is a strongly held view in financial lending circles of favouritism towards the pillar banks and that the conditions of eligibility to the fund are structured in order to suit the big established players in the market.”

If only Michael “Transparency” Lowry had elaborated on favouritism.

Perhaps drawing on his years of extensive experience in tribunal chambers, listening to evidence about greedy people favouring other greedy people and doing very well out of it.

Anyway, what’s to be done to address the worrying questions he raised about the conduct of banks charged with administering the SBCI fund and getting the money out to hard-pressed small and medium enterprises?

If you weren’t laughing and banging your head off the wall, you’d take strong notice when Lowry flags up the possibility of financial jiggery-pokery.

“In view of the enormous sums of money involved”, he suggested a plan of action. Representatives of the Strategic Bank Corporation “should be given the opportunity” to appear before the appropriate Oireachtas committee to answer questions about the fund, how it is operated and what sort of return is evident in terms of helping the SME sector.

A decent sort of inquiry, no doubt. “A review to understand if the SBCI is delivering on its remit generally.”

We’re all for that. And if the worst comes to the worst and the review doesn’t get anywhere, why not go the whole hog and hold a tribunal? And if they don’t like it, they could tie the whole process up with endless trips to the High Court, like some people do.

Thank you, Michael “Transparency” Lowry for bringing this serious financial matter to the nation’s attention. We should be grateful to the wise people of Tipperary for putting this man of conscience into our national parliament.

Meanwhile, with November 11th having passed, the Taoiseach put away his little enamel lapel poppy worn in memory of the many Irish people who died in the Great War, for another year.

But 2017 marks another anniversary – it’s 20 years since the establishment of the Moriarty Tribunal into Payments to Politicians and Related Matters. September 26th, 1997, to be exact.

Perhaps we should have some sort of commemorative flower pin to remember it, and other atrocities.