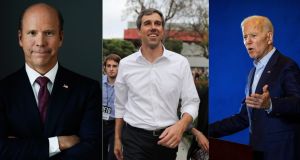 The question of who is the most Irish contender in the race for the White House has set off a jovial debate among Democratic candidates running for the US presidency.

And the issue might yet be resolved in traditional fashion: over a pint of Guinness.

Joe Biden, the former US vice-president and Democratic frontrunner, claimed that there was “only one real Irishman” in the 2020 race for the White House before declaring, “and it’s me”.

The statement was taken by some on social media as a slight directed at at least four other candidates with Irish ancestry running for president in a crowded field of 21.

Mr Delaney responded by challenging Mr Biden to settle the matter over a pint.

“I’m sure there’s a civil way to figure this all out,” Mr Delaney tweeted on Tuesday.

“Maybe over a pint of Guinness in Rehoboth, ” he added, directing his message at Mr Biden and referring to the seaside resort in the former vice-president’s home state of Delaware.

It all started at the weekend when a reporter for the Financial Times, the newspaper’s Washington bureau chief Demetri Sevastopulo – who is originally from Dublin – asked Mr Biden after a campaign event in South Carolina: “Can an Irish man get a question?”

The approach worked, and in a video posted by Sevastopulo on Twitter, the journalist asked Mr Biden had he changed as a candidate over the years.

As he was leaving the event, the US politician, who regularly talks with affection about his Irish roots, rolled down the window of his car and joked with the reporter in a moment not captured on camera: “The Irish guy? There’s only one real Irish man running for president, and it’s me.”

Some supporters in Mr O’Rourke’s camp did not see the funny side to Mr Biden’s remark.

“Beto has done nothing but praise Biden and this is what Biden says in return,” one Twitter user posted using the subject line “#Beto2020”.

Asked by Sevastopulo on the campaign trail in March if he intended to celebrate St Patrick’s Day with a pint, Mr O’Rourke said he would “delegate the pint drinking to a friend”, before adding: “If in Ireland, you can count me in.”

Another Twitter user named TxBlueBanshee referred to Mr Biden’s career-long weakness for gaffes. “Oh-why? I love Joe but that mouth. There is no reason to dis the other candidates that have Irish ancestry. I mean, what a waste of breath,” the user tweeted.