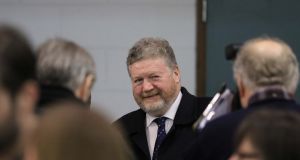 James Reilly: approached by some in Fine Gael about the possibility of filling a Seanad seat. Photograph: Nick Bradshaw

A number of former Fine Gael TDs and ministers are hoping to be appointed to the Seanad in the event of Enda Kenny being elected taoiseach. The new taoiseach will nominate 11 Senators.

Among those being mentioned for a nomination is the current Minister for Children, and former minister for health, Dr James Reilly, who is also Fine Gael’s deputy leader. Dr Reilly lost his Dáil seat in Dublin Fingal at the general election.

Others being mentioned include Paudie Coffey, the Minister of State at the Department of the Environment. Mr Coffey was a TD for Waterford but lost his seat at the election. He ran in the Seanad election but was unsuccessful.

The Seanad count finished this week, and the state of the parties after the 49 elected seats were filled was: Fianna Fáil 14, Fine Gael 13, Sinn Féin seven, Labour five, Green Party three, and Independents eight.

It is likely he will allocate a number of the nominations to Independents if they join a Fine Gael-led minority government. Labour sources have expressed hope they may get a number of seats from Mr Kenny.

Sources disclosed Dr Reilly had been approached by some in Fine Gael about the possibility of filling one of the 11 seats.

It is understood Dr Reilly, who is returning to work in general practice in Lusk, Co Dublin, would be open to the prospect of a seat in the Upper House. He lost his seat in the expanded five-seater Dublin Fingal constituency at the election.

Other Fine Gael candidates who failed to get elected to the Dáil or Seanad who have also been mentioned as possibilities for the taoiseach’s 11 include Tom Sheahan, Tony Lawlor, Michelle Mulherin, Mr Coffey, Eamon Coghlan, James Bannon, Noel Coonan and Maurice Cummins. Also mentioned is outgoing Independent senator Marie-Louise O’Donnell, one of Mr Kenny’s nominees to the last Seanad.