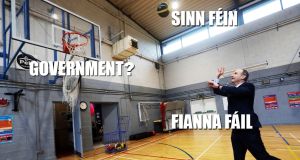 Half a political generation ago (well, 2011), Fine Gael brought in consultant Ravi Singh to help on their digital strategy.

Singh was supposedly a key cog in the 2008 Obama digital campaign (spoiler: he wasn’t); he dazzled Fine Gael HQ with dizzying claims and outlandish plans. It all ended poorly for Singh and Fine Gael after a website hack and something embarrassing called a “Twolicy”. The party was forced to part ways with their guru (but not before paying him a reported €100,000).

Going by Fine Gael’s meanderings into social media during GE2020, the party’s digital strategy hasn’t improved much since Singh’s heyday. Hot on the heels of its “policy hunt” video nasty, Fine Gael fluffed its lines several times over the weekend. Their video of Cabinet members emphatically saying “no” was grist to the mill for Twitter’s pranksters, followed up by a maladroit meme featuring Micheál Martin, Sinn Féin and a poorly aimed basketball shot representing the next government. No, we don’t know what it was about either.

At least they’re faring marginally better than their one-time digital sage, last spotted on the receiving end of a US conviction for illegally channelling over $500,000 to mayoral candidates in San Diego.

Last week was one to forget for Fine Gael Senator Catherine Noone, whose apparent belief that her party leader is “autistic” has made the rest of her political career an uphill struggle, never mind her efforts to secure a second seat for the party in Dublin Bay North. Apparently her misstep was all down to tiredness, though. In an email to a constituent, first reported by the Sunday Independent, Noone said the “only possible explanation is that I was tired from campaigning”.

With the campaign entering into its final days and exhaustion mounting among candidates, maybe Leo Varadkar should prepare himself for more fatigue-induced friendly fire.

I will never go into government with Sinn Féin. I asked my team if they would and they answered unequivocally.

Ready to run through walls... again

When you’re up for a fight, the saying goes that you’re ready to run through walls. Maybe Dublin Bay North candidate Ben Gilroy was worried about voters not quite grasping the point unless he abandoned the metaphor and illustrated it for them literally. During a YouTube video, a charged Gilroy first of all tried to smash a wall emblazoned “Fine Gael” with a hurley (repeating a trick from a viral video during his unsuccessful run for a seat in Brussels last year). Unfazed, Gilroy (with a battle cry of “they think they’re tough!”) sprints through the flimsy wall.

Anti-eviction activist Gilroy, who is a candidate for the Irish Freedom Party, has never polled more than 13 per cent of a quota despite standing in four different elections in Meath East (twice), Midlands North West and Dublin. It seems he’s more successful at running through walls than running in actual elections.

2014 – The last time Sinn Féin outperformed Fine Gael in a Red C poll, as they did at the weekend

Fine Gael seems to have added a surprise third candidate in Louth (pictured), but what is it about the party of law, order and low personal taxes that possibly could have attracted billionaire vigilante Bruce Wayne into the fold?

In the last week of the campaign, the parties are undoubtedly going to get a little dirty but also perhaps a tad petty. Aontú made a bit of a song and dance over the weekend about Verona Murphy, the Fine Gael reject-turned-Independent candidate in Wexford, appearing to use the same election posters she used in the November byelection with certain details cut off the poster.

Candidates are entitled to use old posters but one wonders how Fine Gael feels about this, even with any details linking her to the party cut off.

A photograph was circulated by Aontú showing the poster on a Wexford pole and the party’s message included a question from the party’s candidate in Wexford, Cllr Jim Codd – an unfortunate name for a politician – asking whether the poster was from her byelection campaign.

A call to Murphy seeking an explanation was not returned.