The high cost of Irish citizenship is preventing hundreds of young adults who moved to Ireland as children from participating in the general election, says the president of the UCD Students' Union Joanna Siewierska, who is originally from Poland. 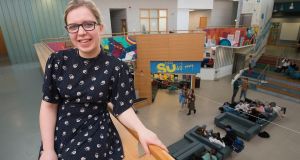 The high cost of Irish citizenship is preventing hundreds of young adults who moved to Ireland as children from participating in the general election, the president of the UCD Student’s Union (SU) has said.

Joanna Siewierska, a UCD law and social justice graduate and the university’s current SU president, says the €175 application fee, combined with the €950 payment to secure citizenship, has created a barrier for many young people who want to vote.

Ms Siewierska moved to Ireland from Poland aged seven and has been involved in student politics since her mid teens. She campaigned in the same-sex marriage referendum, the repeal referendum and the 2016 general election. She also organised, as part of the UCD SU, a voter registration drive after the 2020 election was called to encourage as many students as possible to vote.

However, on February 8th, Ms Siewierska will not be able to cast a ballot.

She says her parents never considered applying for Irish citizenship as the family already hold European passports. However, the 23-year-old says it’s deeply frustrating not being able to vote in referendums or general elections. She plans to apply for citizenship but for now cannot afford the fee or the additional costs of translating documents.

“It’s very frustrating. If the cost was just administrative that would be completely fair and understandable. But when the reason I can’t access citizenship is purely financial it does make you feel let down.”

During her studies at UCD Ms Siewierska worked three days a week to cover her daily costs. She now works full-time in the student’s union but still cannot afford to become Irish.

“It’s very tough watching the election unfolding knowing I can’t really have an impact. I have a voice and I want to be able to say ‘that’s the government I voted for’.”

Voting gives a person a sense of belonging, says Ms Siewierska. “It makes you feel part of the civil and social space. It’s also my right, I’ve lived here for 15 years. I work and pay taxes but I can’t vote.”

Having grown up in Coolock, an area where progression rates for students onto third level can be as low as 15 per cent, Ms Siewierska wants to see candidates calling for greater equality in access to education. “I’m now working in Dublin 4 where it’s nearly 100 per cent going on to higher education. If I could vote I’d look for candidates championing equality of opportunity. We need to invest better in communities that have been left behind. We’re hearing of the recovery but it’s not felt by everyone.”

'The Government keeps talking about integration and there is no higher level of integration than acquiring citizenship. But they’re not doing anything to make it easier for people'

Ms Siewierska knows many other students who have been unable to become citizens but say most do not speak about this “hidden barrier”. The cost of citizenship should be brought down to ensure young people starting out in their careers can also become Irish, she says.

Teresa Buczkowska from the Immigrant Council of Ireland agrees that the costs associated with citizenship obstruct many people from applying and says measures should be taken to ensure young people, or workers on low salaries, can afford the process.

“It’s one of the highest in Europe, it can run up to €1,500 when you factor in the extra documents,” said Ms Buczkowska, adding that Government should consider reducing the cost for European citizens or young people who came to Ireland as small children.

“The Government keeps talking about integration and there is no higher level of integration than acquiring citizenship. But they’re not doing anything to make it easier for people.”

Today was hottest day of year so far with 26.8 degrees recorded in Roscommon 21:14
2,000 students yet to apply for calculated Leaving Cert ahead of deadline 20:30
Coronavirus: Further nine deaths reported along with 46 new cases 21:30
Troubles victims’ group calls for inquiry into 1970 Arms Crisis 20:16
Dangerous student stalker sentenced to seven years in jail 20:13

1 All students will not return to school even if social distancing rules are relaxed – McHugh
2 Dangerous student stalker sentenced to seven years in jail
3 Miriam Lord: Taoiseach is trapped in a Zoom session from hell
4 Coronavirus: Further nine deaths reported along with 46 new cases
5 Emily Maitlis thanks BBC viewers for support after Cummings row
Real news has value SUBSCRIBE