For 32,000 new Irish citizens, this is the first general election they are eligible to vote in 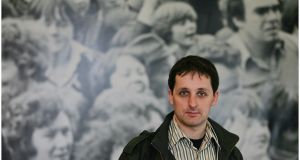 On February 8th, Karolina Ó Beacháin will cast a vote for the first time in an Irish general election. Originally from Poland, Ms Ó Beacháin became an Irish citizen four years ago specifically because she wanted to vote.

“I couldn’t imagine not voting here, it’s my country now. I’m Polish by birth but Irish by choice. I was voting in the locals before, but the fact that I couldn’t vote in the generals wasn’t natural. How could I have an influence?”

Ms Ó Beacháin is one of the 5,072 Poles to have become Irish citizens in the past four years. Since 2016, 32,247 people from around the globe have become citizens of this country. They are all eligible to vote, yet have they taken the time to register? How interested are our new citizens in Irish politics?

'People in less affluent areas find it difficult to get [election] information. The same applies to younger people, and new citizens would also fall into this category'

Like all Irish, new citizens who were not included in the 2019-2020 electoral register can only vote on Saturday if they added their name to the supplementary register by the January 22nd deadline.

More than 1,200 Latvians and Pakistanis have also become Irish citizens since 2016 followed by around 900 Brazilians and Chinese.

Nearly half of adults who obtained Irish citizenship in 2019 – some 2,627 people – lived in Dublin city and county, according to Department of Justice statistics.

An additional 1,342 new citizens were based in Leinster; 1,125 were living in Munster; 407 were living in Connacht and 193 lived in Cavan, Monaghan and Donegal.

Dr Adrian Kavanagh from Maynooth University says regardless of whether a person has secured citizenship, people only tend to vote when they have set down roots.

“The longer you’ve lived in an area the more you know the local issues. If you’ve spent 70 years in west Offaly you’re very clear on the candidates and their backgrounds. But if you’re new to an area you’re not tapped into that.”

The “cost of voting” theory – meaning a person’s access to information around an election – also plays a strong role in whether they participate.

“Affluent areas are more tied in with better education and find it easier to get information on voting. People in less affluent areas find it difficult to get this information. The same applies to younger people, and new citizens would also fall into this category.”

'Our system is predicated on the idea that people live at the same address and don’t move. It hasn’t kept up with the reality of contemporary Ireland'

Prof Mary Gilmartin, who specialises in migration and mobility at Maynooth University, is more positive about new Irish citizens’ electoral participation, particularly among Poles. “EU citizens have pretty similar rights so not being able to vote in elections is something that would motivate many to seek Irish citizenship.”

While EU citizens are entitled to vote in local elections, Prof Gilmartin believes many are actually reluctant to get involved until they have Irish citizenship.

“They feel as if they aren’t really entitled to vote. There’s also limited power at the local level so not having a vote in the Dáil elections is quite exclusionary for people.”

However, confusion around how to register and where the local polling station is located can act as a barrier to many, she says, adding that the decision to hold the 2020 general election at such short notice, and before the new electoral register came into effect, will have excluded many new Irish citizens from voting.

“We also know migrants are significantly more likely to be living in rental accommodation. Our system is predicated on the idea that people live at the same address and don’t move. It hasn’t kept up with the reality of contemporary Ireland.”

Chairman of Forum Polonia Barnaba Dorda has noticed far more political participation among Ireland’s Polish community in this election than ever before. “Poles are settled here now so national politics is more appealing to them. They want to have a say in what’s going on at the national level.”

The housing crisis, the cost of childcare and access to healthcare are issues that affect the Irish-Polish community as well, says Mr Dorda. “It’s the same crisis for Poles in Ireland as it is for the Irish.”

Following the announcement of the 2020 general election, Forum Polonia launched a campaign urging Poles with Irish citizenship to register to vote. “We’re trying to encourage people to think about what is important for their lives here and to talk to politicians about their concerns,” says Mr Dorda.

'The new Irish have different political views; there should be a place for them in every party'

Ms Ó Beacháin, who is a Green Party campaign manager in Dublin north west, does not believe many new citizens will take part in this election. Unless political parties actually target these communities and factor their needs into policy commitments, new Irish citizens are unlikely to take an interest in national politics, she says.

“Parties don’t really address the problems of the new Irish, they don’t recognise the different challenges we face like bilingual education for our children. But there’s a lack of targeting, even in terms of their messaging.”

While the 2019 local elections saw a small number of candidates from migrant backgrounds secure seats, Ms Ó Beacháin believes it’s almost impossible for similar candidates to secure a win in the general elections. “They will have to break through another glass ceiling. In order to be selected you have to work at it for many years; breaking that circle takes so long. Even if someone works very hard you still need the local connections like ‘I knew your father or your grandfather’.”

The election of just two candidates from migrant backgrounds to Dáil Éireann would create representation at Government level that new Irish citizens can relate to, says Ms Ó Beacháin. “The new Irish have different political views; there should be a place for them in every party.”