Scare tactics in elections need to be sophisticated to work, experts say 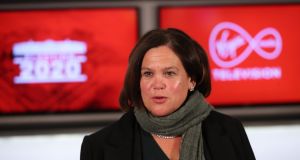 Sinn Féin leader Mary Lou McDonald. A series of opinion polls has shown a surge in support for Sinn Féin, despite Fine Gael and Fianna Fáil attempting to scare the public and refusing to countenance coalition with the party. Photograph: Niall Carson/PA Wire

Scare tactics in general election campaigns are not a new phenomenon, but have to be sophisticated to work, experts have said.

A series of opinion polls in the general election has shown a surge in support for Sinn Féin, despite both Fine Gael and Fianna Fáil attempting to scare the public and refusing to countenance coalition with the party but then claiming each other would go into such a partnership.

“I think Sinn Féin have got a sympathy vote,” said PR consultant and former government adviser Richard Moore of the attacks.

He added that the confidence-and-supply arrangement as a political apparatus is “dead in the water” and Sinn Féin had done very well in their own attacks including on the deal.

Another authority on election campaigns, speaking anonymously, said scare campaigns “have to be sophisticated to work” and they are based on research. Political parties have focus groups to identify some underlying fear factor and nervousness on particular issues and then exploit it.

He also suggest that there may be a reverse from 2016 when Fianna Fáil voters were reluctant to tell pollsters they were voting for the party.

“It may now be socially embarrassing,” to be seen to vote for the party. “I think there are people who are going to vote for Fine Gael who weren’t going to admit it because they weren’t sure if it was acceptable.”

And he highlighted the 1997 election when the public was “terrified” into believing that Fianna Fáil’s John O’Donoghue was the best man to deal with “out of control” crime.

Subsequent election scares focused on tax increases, leadership, and in 2016 whether Fianna Fáil could be trusted in office, with billboard posters about ghost estates.

DCU professor of politics Gary Murphy points to some historical campaigns that attempted to frighten the voters.

“You had Seán MacEntee (Fianna Fáil tánaiste) calling John A Costello Goebbels in election campaigns in the 1950s,” he said.

“Fianna Fáil had red scares against Labour in both 1932 and 1969. Bashing manifestos has been going on since Fianna Fáil first introduced a manifesto in 1977 but there’s no evidence such attacks have had any great impact on the electorate.”

However he cites an exception - the 2002 general election when Progressive Democrats president and attorney general Michael McDowell described then taoiseach Bertie Ahern’s pet project, the Bertie Bowl, as a “a Ceausescu-era Olympic project”.

Mr Moore pointed out that when it looked like Fianna Fáil might get an overall majority, the PD candidate put up election posters that said: “Single party government – no thanks”.

“That put the jitters into most people – ‘Do you really want Fianna Fáil in by themselves?’” And it worked, with the PDs ending up in government.

A 2011 election scare tactic also worked when “it looked as though Fine Gael had a good chance of making it on their own”. Labour leader Eamon Gilmore used a campaign slogan “Every little hurts”, advertising half a dozen cuts a Fine Gael government would introduce if allowed into government on their own.

Mr Moore also said the same thing happened in 2007 when the electorate was thinking that after 10 years in government “Fianna Fáil had overstayed their welcome”. Fianna Fáil had in the early part of the campaign warned the electorate against changing to Fine Gael and Labour because “you’ll jeopardise prosperity”.

It appeared to fall flat as questions were raised about Bertie Ahern’s finances but in the last three or four days it switched when Fianna Fáil’s Brian Cowen was seen as masterminding the fightback, and there was a “significant swing back”.

1 Taoiseach has confirmed schools will reopen at the end of August
2 Derek Chauvin charged with murder in connection with death of George Floyd
3 Coronavirus: Further six deaths reported along with 39 new cases
4 Garda to scale down Covid-19 enforcement for June bank holiday
5 Galway shuts down popular tourist spots and beaches over Covid-19 concerns
Real news has value SUBSCRIBE