Government confident Varadkar will survive motion of no confidence 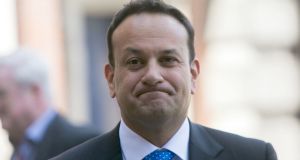 The Government is confident all 84 TDs from the coalition parties will support Tánaiste Leo Varadkar in voting down a Sinn Féin motion of no confidence on Tuesday.

The three parties in Government presented a united front over the weekend ahead of the two-hour debate which will occur in the National Convention Centre on Tuesday evening.

For her part, Sinn Féin leader Mary Lou McDonald has rejected claims that the party’s motion of no confidence in the Tánaiste was “simply to score points or mudslinging”. She said Taoiseach Micheál Martin had not sanctioned Mr Varadkar and “as the Opposition the only sanction available to us is to table a motion of no confidence”.

Mr Varadkar has admitted sending a draft copy of a GP contract agreed with the Irish Medical Organisation to the rival National Association of General Practitioners.

Ms McDonald said “the politics of the nod and wink, the insiders, the cosy clubs, the old boys’ network, call it what you will, has a cost, has a price and it’s a cost that’s borne by the Irish people.

“This type of claustrophobic, entitled, obnoxious frankly, politics is exactly the kind of politics that has left us in difficulties,” she claimed in an interview with RTÉ Radio’s This Week.

Minister for Finance Paschal Donohoe said on the same programme that “the very kind of accountability” Sinn Féin was seeking had already happened when Tánaiste publicly acknowledged the issue, consulted Government leaders and went into the Dáil and apologised. He claimed there was always “heat” from Sinn Féin but “never any light” and the party was always “pointing the finger and never showing the way”.

Fine Gael has also accused Sinn Féin of costing the taxpayer an additional €25,000 because the Dáil will have to sit in the convention centre to allow all TDs vote on the no-confidence motion because of Covid-19 social distancing requirements.

Each sitting of the House in the building in Dublin’s docklands costs in the region of an additional €25,000. The Dáil business committee had agreed a sitting on Wednesday in the centre before Sinn Féin announced its motion. The party’s speaking time is on Tuesday but Sinn Féin said there would be no additional expense if the party instead swopped with Independent TDs who have a slot on Wednesday.

Fianna Fáil Minister of State Robert Troy said the motion amounted to no more than an “act of political theatre” by Sinn Féin. He said the party knew the motion was going to be defeated but had tabled it. He told The Week in Politics on RTÉ that Fianna Fáil would reject the motion but he added: “If further documents emerged we would have to review that.”

Opposition groups and parties other than Sinn Féin, which have declared their position, have said they will back the Sinn Féin move.

Labour’s Aodhán Ó Riordáin said his party did not have any confidence in the Tánaiste’s explanation on the mater.

“We do feel the Oireachtas would be better served in debating other issues next week,” he said, but “we have to say we don’t have confidence in the way the Tánaiste has managed this issue, or indeed many other issues”.

The Social Democrats are expected to support the motion but the party has said it will meet at noon on Monday to adopt a formal position.

The motion has been received by Government parties as an effort to stoke up dissent, particularly within the Fianna Fáil and Green parliamentary parties.

Fianna Fáil TD Jim O’Callaghan, who has been critical of the Tánaiste on this matter, said this weekend as a Government TD he will be supporting the Government.

“I said last week that although what the Tánaiste did was wrong, I didn’t see enough there to force him to resign,” he said.

The Sligo TD Marc MacSharry, who last week described the Taoiseach as a “disgrace” for having strongly defended Mr Varadkar, was more circumspect. When asked for his response, he said: “Presumably the party will consider the matter in advance.”