Irish women are essentially working for free for rest of year due to pay gap, campaign says 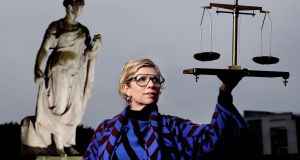 Sonya Lennon, founder of the campaign WorkEqual, is pictured ahead of Equal Pay Day on Monday. Photograph: Marc O’Sullivan

Women in Ireland are effectively working unpaid for the next seven weeks because of the current 14.4 per cent gender pay gap, according to the WorkEqual campaign.

The campaign, established in 2016, aims to highlight the pay differential between men and women and centres on a month of activities and events every November, including what is called Equal Pay Day. According to the campaign, Equal Pay Day is the date on which women stop earning in a year, relative to men, because of the pay gap.

This year Equal Pay Day is Monday, November 9th, and for it WorkEqual will release a video featuring more than 20 Oireachtas members and the Lord Mayor of Dublin, Green Party councillor Hazel Chu, speaking about gender equality.

The Oireachtas recently reconvened the WorkEqual Oireachtas all-party group, which the campaign hopes will push gender equality legislation and policies in the coming years.

The gender pay gap figures are based on the latest available Eurostat statistics, which are from 2017 and show a pay gap in the State of 14.4 per cent, slightly less than the 14.9 per cent overall EU gap.

Founder of the WorkEqual campaign Sonya Lennon said gender pay inequality is complex but is in part due to fewer women in senior or higher-earning roles and more women working part-time.

“While the pay gap is a somewhat blunt tool and it must be remembered that it is a symptom of deeper issues, it is effective in proving that, across the workforce, women persistently earn less than men,” she said.

“Ireland has made progress on gender equality in recent years, but we still have a long way to go,” she added.

“The latest index from the European Institute for Gender Equality gives us a score of 72.2 out of 100. It shows gender inequalities in Ireland are most pronounced in the domain of power, where we score only 55.8 points.

“Our need for effective and affordable public childcare is highlighted starkly in the index findings, which show the gender gap is much wider between women and men in couples with children than in couples without children.

“The full-time equivalent employment rate for women is only 45 per cent, compared to 61 per cent for men. And the working life of women in Ireland lasts, on average, 34 years – compared with 40 years for men.

“All of this means women are not yet on an equal footing – economically, socially or politically – with men. This needs to change.”

The campaign is looking at gender equality in other jurisdictions and its panel discussions this month feature MPs, trade union activists, research experts and business leaders from New Zealand, Australia, the US, the UK and Iceland.

A lunchtime online panel discussion will also take place on Monday on “Why Understanding the Pay Gap is Key to Gender Equality at Work”, with experts from Iceland, the UK, and the State.

Further information is available at WorkEqual.ie