Concerns that European Commission departing from commitments made last year 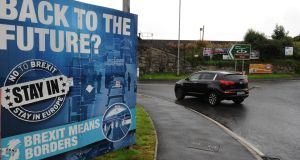 Residents of Northern Ireland risk losing citizenship rights linked to the Belfast Agreement due to new policies being drafted for Brexit, campaigners have warned.

The 1998 Good Friday peace deal allows those born in Northern Ireland to be British, Irish or both, thereby also providing the rights of citizens of the European Union (EU). But under new Brexit proposals, Northern Ireland residents with Irish citizenship (plus those who identify as British but are entitled to Irish citizenship) risk losing a range of EU rights. These include access to the European Health Insurance Card, access to EU student fee rates, the right to vote for MEPs, plus the right to be joined by non-European Economic Area (EEA) family members.

A Northern Irish-based human rights group, the Committee on the Administration of Justice (CAJ), has now written to European Commission president Jean-Claude Juncker seeking urgent clarification amid concerns that draft policy for Northern Ireland “departs from the commitments” made by the UK and the EU.

In the correspondence, seen by Belfast journalism website thedetail.tv, the CAJ said it was concerned the commission was departing from the commitments made in the EU-UK Joint Report published in December 2017 to frame the Brexit talks.

It would limit Irish citizens in Northern Ireland to holding mostly “dormant” EU rights that are only exercisable if the rights holder leaves Northern Ireland and takes up residence in another EU member state.

“In a practical sense this would render Irish citizens in Northern Ireland as having fewer EU rights than Irish citizens resident in existing third countries.”

The CAJ said the commission’s position “also conflicts with the commitment to protect the [Belfast Agreement] in all its parts”.

In 2017 the Department of Foreign Affairs in Dublin received 82,274 applications from people in Northern Ireland for Irish passports, up from 45,646 in 2012.

Wider concerns over the protection of rights in Northern Ireland were highlighted in June, when a joint statement from the Alliance Party, the Green Party, SDLP and Sinn Féin expressed “profound concern that Brexit will result in further regression on equality and rights”.