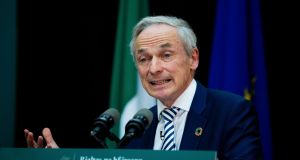 Richard ‘Ask Me Anything’ Bruton wouldn’t answer the one big question they all wanted to ask: how much is Granahan McCourt putting up? Photograph: Tom Honan for The Irish Times

Broadband is a human right. At least the Minister for Rural and Community Development didn’t say that.

Anyone for the last of the placards?

Form an orderly queue outside Michael Ring’s office or contact your local Fine Gael canvassing team and you’ll be sorted.

In a tense day in Dáil Éireann, when exchanges between Government and Opposition on the proposed national broadband plan went beyond the puffed-up posturing of the usual hostilities, Ring was having no truck with TDs who had the gall to question the wisdom of the Government’s decision.

Mattie McGrath, stalwart of the Rural Independents Group, didn’t need to be told that by Ringo.

“Go home and feed the dogs,” he shouted, inexplicably, at the red-faced Minister.

There was genuine worry among deputies from all sides about this plan. The opposition made its misgivings very clear, but the look of concern on the faces of silent Government TDs hinted that there may not be full agreement in the ranks. They were aware of the very strong advice from Robert Watt to the Cabinet against proceeding with the project. The secretary-general of the Department of Public Expenditure didn’t hold back when recommending its rejection on grounds of cost, affordability, value for money and risk.

But a line was agreed and they toed it. There wasn’t much laughing when Michael Ring blew his gasket.

“I’m all for broadband in rural Ireland,” he roared again.

“So are we but the Government cannot deliver it,” retorted Fianna Fáil’s Thomas Byrne.

There was a theory doing the rounds that as soon as the elections are over, the negotiations will collapse

Fine Gael seemed to be making a concerted effort to burnish its great concern for rural Ireland in the face of uncaring opposition. Yet the one area of consensus in the Dáil was everyone’s desire for decent national broadband as soon as possible. While strongly questioning the Government’s plan, speakers on all sides – rural and urban – were at pains to stress they are most definitely not against its provision.

There were charges that this sudden rush to announce the plan – even though the Minister for Communications, Richard Bruton, admitted the nitty-gritty hasn’t been “nailed down” and a contract won’t be signed anytime soon – was more to do with getting the message out before the local and European elections.

Could they be that cynical?

There was a theory doing the rounds that as soon as the elections are over, the negotiations will collapse.

We met a Government backbencher from a rural constituency.

“I’ve been on the doors in the last few weeks,” said the TD. “The one thing that keeps coming up is the broadband. It’s all they ask about on the doorsteps. It’s the big issue in the rural areas.” Then he recited how much the Government has allocated for the roll-out of broadband in his bailiwick.

Coincidentally, Michael D’Arcy, Minister of State at the Department of Finance, tweeted soon afterwards: “€81 million is being invested in County Wexford over the next 25 years to bring broadband to 82,500 homes, farms and businesses. This plan is about equal access to services and opportunities for everyone, no matter where they live and work.”

He appended a table of figures which showed a county-by-county allocation of funds, even though the scheme has just been announced.

Rest assured, soothe all the Ministers, money will be found down the back of the Magic Sofa to pay for everything

Rural broadband has leapt to the top of the pecking order for State money, although that particular summit is nearly as crowded now as the top of Croagh Patrick on Reek Sunday. There is always room at the top for another billion-dollar project when the urgent political need arises.

So even if the Government has decided to probably commit a potential €3 billion in a secret deal with an American investment outfit to deliver broadband to the farthest corners of the country, this will not have a negative impact on badly needed projects already promised funding from the State purse.

There is no need to fear cuts in other, already constrained, areas such as education, health and housing. The Government is not in the business of dashing expectations at this important time in the political calendar. Rest assured, soothe all the Ministers, money will be found down the back of the Magic Sofa to pay for everything.

Tuesday’s cabinet decision to bite the broadband bullet and throw in its lot with the sole bidder willing to take on the task of rolling out a high-speed network nationwide was met with a chorus of opposition when the Dáil resumed after the May bank holiday break.

State involvement with the telecommunications business has an inglorious past.

The scandal over the awarding of the second mobile phone licence to Denis O’Brien’s Esat Digifone company is still invoked when licensing matters are discussed in the Dáil.

A controversy over huge cost overruns in CIÉ during the installation of a centralised railway signalling system led to an Oireachtas inquiry in 2001. Esat also played a major part in that story, with questions arising from its deal with CIÉ to lay fibre-optic cables along the rail network at the same time as the signalling work.

The investigation was abandoned following the Abbeylara court judgement on the powers of Oireachtas inquiries.

The overrun in 2001 was nothing compared to the ongoing situation about escalating costs for the new children’s hospital in Dublin.

Given the less than shining record when it comes to implementing major national projects, it is no surprise that the Opposition wants to see the financial detail underpinning the Government’s decision to support US private company Granahan McCourt’s plan to install the broadband network. The surprise is that the Government thinks it can proceed without providing it.

The Taoiseach wasn’t in the Dáil on Wednesday to answer their questions. Normally, this would lead to bitter complaints from across the floor, but not in this instance because the Minister deputising for him was the Minister in charge of broadband – Richard Bruton.

Richard “Ask Me Anything” Bruton was happy to deal with any queries on the matter. He said he was willing to answer questions at any time because he wanted to be utterly transparent at all times.

The Government says it will put €3 billion into the pot to ensure the project proceeds as quickly and efficiently as possible. How much is Granahan McCourt putting up?

Ask Me Anything Bruton wouldn’t answer the one big question they all wanted to ask.

Anybody can put a line of black marker through a figure or a sentence. It doesn’t make it confidential – it just means you own a black marker

How much? How much money is the private company putting on the line?

Ask Me Anything was very sorry but, “in terms of the sum of the equity involved, I am not going to prejudice the final signing-off on a contract . . . by revealing a figure that, as deputies can see from the redacted documents, is a confidential figure.”

Micheál Martin looked up. “Why?”

The thing that Richard wanted to make clear, and his colleagues fully support him, is that “as a Government, we are not prepared to see rural Ireland left behind.”

This provoked snorts of derision from across the floor in a “what’s seldom is wonderful” kind of way.

As Fine Gael squirmed, it was put again and again that the commercial sensitivity argument doesn’t stack up when the tender process is over and there are no competitors.

“We have quite a few months ahead of us before we actually sign the contract,” said a haunted Minister for Finance on the Six One news.

Broadband must come, but will this be the way?