Minister contacts restaurants to remind them of ‘obligations’ on tips 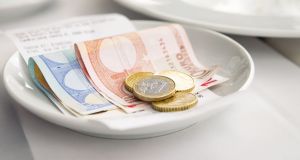 In some restaurants, it has emerged, tips or service charges become part of general business cashflow, used to pay wages and other business outgoings. A number File photograph: George Clerk/iStock/Getty Images

Minister for Employment Affairs Regina Doherty is writing to a number of restaurants who are including tips received by their employees as part of salary to alert them “to their obligations”, the Dáil has heard.

Following the controversy about restaurants withholding tips or including them as part of wages, Minister for Communications Richard Bruton said Ms Doherty is contacting restaurants where practices are in operation “which are not in accord with a proper approach”.

In some restaurants, it has emerged, tips or service charges become part of general business cashflow, used to pay wages and other business outgoings.

Mr Bruton said they included a number of restaurants mentioned by Independent TD Joan Collins who has raised the issue a number of times in the House.

Ms Collins called for emergency legislation to be introduced after Tánaiste Simon Coveney, before Easter, mistakenly told her in the Dáil that an employer including tips in the calculation of salary was “acting illegally”.

Mr Coveney also pledged to act on the issue if it was needed.

Ms Collins accepted that the Tánaiste had given this view in good faith and she called for emergency legislation “to close the loophole and to make this disgraceful practice unlawful, as the Tánaiste believed it was and as it certainly should be”.

The Dublin South-Central TD said restaurants including The Ivy and the Hard Rock Cafe engaged in this practice.

She also hit out at hairdresser Peter Mark who had “imposed a new training fee on its trainees”, to recoup from them “the benefits lost due to the abolition of training rates to low-paid workers”. Hairdressers are now required to pay the full minimum wage to employees following the enactment of the Employment (Miscellaneous Provisions) Act 2018.

Ms Collins noted that last month “possibly on legal advice”, The Ivy restaurant, changed its policy of applying a service charge to tables or five or more to include all tables. “It also removed the option to pay a tip via credit card from the payment machine.” She said customers believed this service charge goes to waiting staff and back-room staff but it did not.

“Service charges are discretionary. If customers are happy with their server, they should always pay him or her in cash. This area has to be legislated for immediately.”

Mr Bruton said however the Low Pay Commission believed that there was not enough evidence that employers keeping tips intended for restaurant staff was a significant enough problem to require legislation.

He said Ms Doherty had written to employers and wanted to secure a sectoral agreement which would have the force of law. “That would be the ideal outcome,” Mr Bruton added.

He said there was insufficient evidence to prove the issue was a significant problem but Ms Collins said Sinn Féin had conducted a survey in Galway where the practice of retaining tips or including them for salary occurred “quite regularly”.

She said “very greedy” employers were “taking money from the hands of their workers who are trying to make a living”.

The Independent TD believed businesses “could also be banned from adding a service charge or forced to make it clear that the charge is discretionary”.

Mr Bruton said however that a sectoral agreement was the best option for a solution because there would be unjustifiable costs in administrative and compliance costs.