Reasons include overspending and non-achievement of €150 million savings 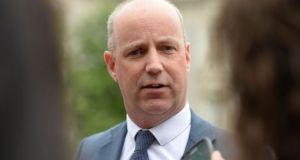 Junior health minister Jim Daly will explain to the health committee that the health service needs the Dáil to vote the extra money for this year’s budget Photograph: Cyril Byrne/The Irish Times

Overspending last year, a shortfall in income this year, increasing legal costs, increased GP costs and the non-achievement of €150 million in savings will all be cited on Wednesday by the Government as contributing to a €655 million hole in the Department of Health’s budget.

Junior health minister Jim Daly will explain to the health committee on Wednesday morning that the health service needs the Dáil to vote the extra money for this year’s budget to fill the gap created by bursting the spending ceilings for this year.

Meeting the costs of 2017 overspending, and the non-achievement of projected savings in this year’s budget are the largest individual components of the budget hole this year.

At the beginning of the year, the HSE said it would making savings of €150 million as a result of its “Value Improvement Programme”.

However, Mr Daly will tell the health committee that “none of the targeted savings under the Strategic Value improvement will be achieved at year end”.

“The total additional funding I am seeking for 2018 is €655 million. Of this, €10m is to compensate for a shortfall in Appropriation in Aid, €20m is towards Capital Works and €625m is towards overspends in current expenditure in various areas of the HSE,” Mr Daly will tell the committee.

“I acknowledge that the amount sought is significant representing as it does 4 per cent of overall health expenditure . . . We need to keep the recovery going and the economy strong, so that we can continue to develop our health infrastructure and the provision of health services into the future in 2018,” he will say.

Meanwhile, the head of the Government’s budget watchdog will tell another Dáil committee that filling the budget hole in the Department of Health every year is leaving the public finances in a position where they are more vulnerable to future economic shocks.

Prof Séamus Coffey, the chairman of the Fiscal Advisory Council, will tell the Budget Scrutiny Committee that the Government is repeating the policy mistakes of the pre-crisis governments by using potentially transient tax revenues to expand current spending budgets.

“The repeated failures to prevent unplanned spending increases have resulted in long-lasting increases in spending which are difficult to reverse. These failures represent a repeat of the policy mistakes of the past,” Prof Coffey will tell the committee.

“Pressures in the health sector and elsewhere should be funded through sustainable tax revenues or decreases in spending categories elsewhere. These unfunded spending increases have left the public finances more exposed to adverse shocks, with the budget balance in deficit rather than in surplus.”

Prof Coffey will also warn that Government pledges to control spending in the future have little credibility in the light of the experience of recent years.

“Health spending for 2018 is set to exceed the level of spending budgeted for yet again. The Department of Health has experienced numerous overruns historically and the problem of unrealistic forecasts coupled with a ‘soft budget constraint’ has undermined the credibility of expenditure ceilings.

“Given previous experience, there is a strong possibility that health spending will exceed budget forecasts in 2019,” Prof Coffey will warn.

Prof Coffey will also point to European Commission warnings about the health overspend.

“The European Commission also expressed concern about the over-spending within the health sector, noting that ‘much of the better-than-expected revenue for 2018 is being used to fund within-year current expenditure increases in healthcare, which raises concerns both about the long-term fiscal sustainability and the pace of adoption of the Strategy,’” he will say.