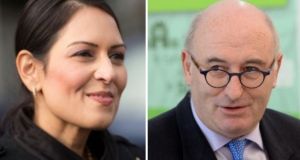 EU commissioner for agriculture Phil Hogan has criticised a Tory MP’s threat to use possible post-Brexit food shortages in Ireland as leverage to secure a better deal, saying it would lead to “the starvation of the British people”.

The Irish commissioner said he believed British consumers would be “horrified” with the suggestion by Priti Patel that food supplies to and from Ireland through the UK “landbridge” should be used as a bargaining chip in negotiations to secure an improved Brexit agreement from Brussels and to encourage Ireland to drop the contentious backstop option in the divorce deal aimed at preventing a hard Irish border. Ms Patel is the UK’s former international development secretary.

Mr Hogan, speaking at an event in Dublin, said the remarks showed “how much out of touch” the Conservative MP was because the UK must import 60 per cent of its food. Moreover, 43 per cent of the food consumed by the UK comes from the Republic.

“So if she wants to advocate a policy that brings about starvation of the British people this is a good way of going about it,” he said, referring to Ms Patel’s comments as reported in the Times newspaper on Friday.

“Consumers will be horrified at the notion that a senior politician, a former minister, would take such a view of being hostile to the food security requirements of the country in which they are residing. I think that that will be seen for what it is. It is a very narrow focus. I doubt if she has any support for this view,” he added.

Meanwhile, leaked British government papers claim Ireland could face food shortages and a 7 per cent drop in gross domestic product if the United Kingdom leaves the European Union without a deal, according to the Times newspaper on Friday.

The paper quoted Ms Patel as saying this should be used as leverage in negotiations to get Ireland to drop its insistence on the backstop guarantee relating to the Border.

The documents specify that trade in perishable goods, such as food supplies, would be particularly badly affected. Though it is unclear what part of the UK government produced the report.

“This paper appears to show the government were well aware Ireland will face significant issues in a no-deal scenario. Why hasn’t this point been pressed home during the negotiations? There is still time to go back to Brussels and get a better deal,” said Ms Patel.

Official sources in Dublin were dismissive of the report, saying that extensive preparations were under way to prepare for all Brexit scenarios, including in the food sector. The leaked documents and recent comments by the hard Brexit lobby are seen in Dublin as a ploy to pressurise the Government, which continues to insist there will be no change to the backstop provision in the withdrawal agreement.

A range of reports have come up with different estimates on the impact on the Irish economy, with Copenhagen Economics completing a report for Government suggesting that under a hard Brexit scenario gross domestic product (GDP) here could be 7 per cent lower over the next decade than would otherwise be the case.

It is unclear how quickly the UK official forecast – reported in the Times – suggest Ireland would be hit. But it focuses on the trading exposure of the Irish economy, reportedly saying this means the economic damage here would be greater than the UK.

It quotes the document as saying that Ireland is “a more open economy than the UK, accounting for 60 per cent of GDP comprised of goods imports and exports, as opposed to 40 per cent for Great Britain” – meaning the economic hit would be worse here.

The threat of food shortages relates to our significant imports of a range of products from the UK and the risk that supply chains could be disrupted after a hard Brexit, with queues at ports and delays due to bureaucracy and tariffs. Ireland imports more than €4 billion in food from the UK each year, just under half of all food imports. But Irish food exports to the UK exceed €5 billion.

Sources here say that preparations are already under way to limit any impact in supplies to shops in the case of a no-deal Brexit, but that some upheaval and delay for a period is possible if there are major hold-ups in freight traffic between Ireland and the UK.

Official sources here and sources in the food sector say that Irish supermarkets and their suppliers have done significant work on examining their supply chains in the event of a hard Brexit. The key problem is that many of the products come directly from UK warehouses into the distribution centres of Irish supermarkets, moving on a daily basis with limited storage on the island of Ireland.

Products imported include ready meals, cereals, biscuits and a whole range of other food lines from the big multinational groups, including some time-sensitive products.

Sources say that Bord Bia has worked with the major groups on these key supply chain issues. And extra storage capacity is being considered in Ireland by some groups to offset the impact of any hard Brexit next March.

However, if there is major disruption across the UK at ports like Dover and Holyhead, this is bound to lead to some delays and disruption to products entering Ireland in the case of a no-deal Brexit.