Interference with election posters is ‘more intense’ this year

Political veterans say ‘skulduggery’ was always an issue in campaigns 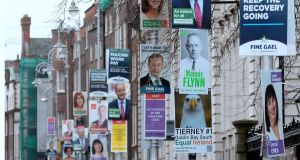 Dirty tricks targeting electoral opponents and their posters are nothing new, but some candidates believe they have become more prevalent and that they have reached new levels of malice and orchestration.

It was alleged one of the Fine Gael canvassers ran away when confronted by the opposing canvassers in Ballymahon, Longford on Monday.

Sinn Féin alleged it was the victim of a “dirty tricks operation” – an allegation that’s in turn levelled at Sinn Féin by other parties who have had posters damaged.

The work is invariably carried out in the “dead of night”, as one candidate in another constituency says. So there’s little to prove ‘whodunnit’ either way unless someone is caught and charged with criminal damage.

Mr Hogan was also one of four candidates in Longford whose heads were cut out of some posters last week. Posters belonging to Independent James Morgan and two of the three Fine Gael candidates were similarly targeted.

A source working with Fine Gael TD Jerry Buttimer’s campaign in Cork South Central – a political dogfight of a constituency in this election – confirms some of his posters appear to have been removed in recent days.

“We were surprised. We put up a lot more posters than are actually still on the poles. Jerry’s own father was stopped by someone who saw his posters being taken down. It’s definitely more intense and more targeted this time.”

Ken Curtin, a first-time election candidate running for the Social Democrats in Cork East, says there has been “an awful lot of messing going on”.

“Posters being interfered with is probably the least of what’s happened. I’ve had posters ripped down, disappeared and thrown over ditches and stuff. In my case, I’ve managed to find most of mine. Some of the other candidates down here haven’t been as lucky.”

He notes many Fianna Fáil, Fine Gael and Labour candidates have had stickers put on their posters reading “I am a liar”.

Mr Curtin, who was “on and off” an activist with Fianna Fáil for about 20 years, says such interference with posters has always gone on.

But he says there is a “new, malicious activity” over the last few elections whereby opponents are deliberately taking down posters, hiding them away and then putting them back up in a random location. As a result, the candidate gets fined for leaving a poster up.

“I deliberately photograph them and I mark the backs of mine so I have some clear identifiers. But not everybody would do that, because you’d have varying levels of experience. Some people get very technical and put up their GPS codes.”

Senator John Whelan of the Labour Party, who is running in Laois, takes particular issue with what he believes is “organised and orchestrated” targeting.

“In the cut and thrust of an election campaign I’m not a shrinking violet,” says Whelan, a journalist and former newspaper editor.

“I understand there’s competition and there’s rivalry and even some gamesmanship, with people jockeying for best vantage points and best positions. But our lads genuinely have a rule to respect the other side regardless and not to be acting the maggot or to be damaging anyone else’s stuff.

But what’s going on is not child’s play or someone on a whim going by and pulling down a poster. Our poster ties are being cut. Poster stands are being broken down. You’d have to have an implement to do it, like some sort of an axe.”

He is among the candidates who have had stickers reading “I am a liar” placed over his posters.

“It mimics and matches what’s going on online. I’m able to give and take it in a debate and you’ve got to take it on policy and there’s some stuff you mightn’t like. But some of the vile and vicious personalised taunts being levelled at me and my family are just beyond the beyond.”

Separately, Mr Curtin urges that when candidates do come to remove their own posters that they also take the cable ties with them.

“Obviously posters have to come down within seven days of the close of polls, but it is vital from an environmental point of view that when the posters are removed that any cable ties are cut off as well because they are a blight on the landscape and they can be potentially damaging to wildlife.”