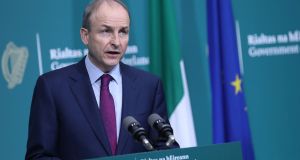 ‘The numbers are too high and we need to get them down. We will take advice from NEPHT and others when making a decision,’ Taoiseach Micheál Martin is reported as having said. Photograph: Julien Behal Photography/PA Wire

Taoiseach Micheál Martin has told his party’s TDs and Senators that it is becoming increasingly evident that Level 5 restrictions will be continued well into February.

At a meeting of the Fianna Fáil parliamentary party, Mr Martin disclosed a special Cabinet meeting will be convened next week specifically to discuss the Covid-19 situation, and the continuing high incidence rate of the infection in Ireland.

“The numbers are too high and we need to get them down. We will take advice from Nphet and others when making a decision,”he is reported as having said. The time span before restrictions could be lifted was now moving beyond the end of this month.

He said that the State still had “some distance to go” in its efforts to curb the spread of the virus and the recent increase of deaths illustrated the devastating impact it can have.

Mr Martin said that 146,000 people will have been vaccinated by the end of the week out of 152,000 doses of the Pfizer vaccine delivered to Ireland.

The priority would remain, he added, for residents and staff of long-term care facilities and front-line staff for the moment.

He said the next EU Council meeting would also focus on the coronavirus pandemic with discussions on variants, antigen testing and genomic sequencing capacity.

On the day of US president Joe Biden’s inauguration, Mr Martin said his election was “good news for Ireland”. He said it would will help reset US-EU relationship.

Turning to the continuing impasse between the Minister for Education Norma Foley and unions over the return of classes for students with special needs, Mr Martin argued the Government’s bona fides was clear.

“No party should be playing politics with it,” he said and then said he acknowledged the level of anxiety there was among those who worked in the field.

The meeting was told it was open to all TDs and Senators to nominate candidates for the forthcoming Seanad by-elections. There are two vacancies caused by the resignations of Fine Gael’s Michael Darcy and Sinn Féin’s Elisha McCallion.

Fianna Fáil has expectations of winning one of the two seats.