‘I’m not a lover of it’: Fianna Fáil delegates on confidence and supply 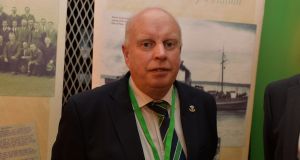 Declan Conway, Waterford
“I am not a lover of confidence and supply. I don’t think we should be supporting Fine Gael. That’s how I feel.”

Michael Murphy, Waterford
“Brexit is big for the party but it’s not the main issue on the door. It’s jobs, homelessness and the children’s hospital is huge. Three years in supply and confidence was enough. I don’t think we should have extended it.”

Michael O’Reilly, Castleblayney, Co Monaghan
“I think it was right to continue confidence and supply in light of Brexit.”

John O’Connor, Castleblayney, Co Monaghan
“I think Micheál has done the right thing. If he called an election, the media would have tortured him. He was in a catch-22. He put the country first.

Rachel Naughton, Roscommon
“I have hated [confidence and supply] from day one. In the last month or two I am holding fire, like the party is. It’s very much uncharted water.”

Michelle Meeley, Roscommon
“I feel the same. I don’t like it. It’s in the greater good to hold on to it to the 29th of March, until after Brexit.”

Frank Ryan, Limerick
“I am totally against confidence and supply. We agreed for three budgets and after that the plug should have been pulled. I do hope when this Brexit thing is over we will be fighting a general election. I am a Fianna Fáil man. If I wanted to support Fine Gael I would have joined them in 1957 and not Fianna Fáil.”

Two men injured in Co Clare shooting 08:57
Election 2020: Will Saturday polling day boost turnout? 06:00
‘You’re on your own down here after 5pm’ 05:56
Most secondary schools to close for day in pre-election strike 01:56
Government accused of ‘losing control’ following shootings and stabbing 01:00
SUBSCRIBER ONLY