‘I hire a driver, I check he can drive’: Belfast reacts to Karen Bradley remarks 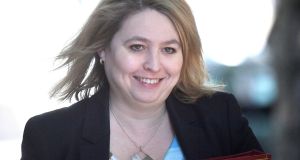 Karen Bradley’s incomprehension regarding Northern Ireland has met its match on the streets of Belfast, where people cannot comprehend how she got the job to run the place.

What mysterious currents flowing through Westminster, what enigmas of policymaking and riddles of Conservative party dynamics, they asked on Friday, could produce a secretary of state for Northern Ireland who knows nothing about Northern Ireland?

“Hire someone for any job, you run them through things, make sure they know what’s what,” said Anthony Quinn (55) a film location manager. “I hire a driver, I check he can drive. Give a 16-year-old a job packing shelves in Tesco, you make sure he can pack shelves.”

The former culture secretary also admitted being “slightly scared” of a place that has enjoyed relative peace and stability since the 1998 Belfast Agreement.

A Downing Street spokesperson said Ms May retained confidence in Ms Bradley and that the minister was “working incredibly hard” to restore devolved government. The Irish Government, too, called her a smart and experienced politician.

But Sinn Féin’s former Stormont finance minister Máirtín Ó Muilleoir said Ms Bradley’s comments were a “sorry reminder” of where the country was on the priority list of the British government.

“We have gone beyond being shocked by the British government’s ignorance of affairs here and their disregard for the rights of people here,” he said. “But there is no way they would appoint a chancellor of the exchequer who could not count or did not know how to read a P and L [profit and loss statement].”

People in Belfast, nationalist and unionist, expressed astonishment that Ms Bradley was put in charge at an exceptionally sensitive time, with Brexit and the breakdown in Stormont’s power-sharing government putting the Belfast Agreement under strain.

“It’s ridiculous that she could know nothing about it and still get the job. Usually you have to show knowledge to get a job. I did,” said Leona Orr (24) a child care worker from Clogher Valley.

Henry McCarthy (76) a retired community worker, said: “I was absolutely horrified that she could be in a position where she was so terribly ignorant of a situation in which so many people were killed, it just baffles me.”

Among those who died in the Troubles was Airey Neave, a Tory MP blown up by a republican terrorist bomb at Westminster in 1979, yet Ms Bradley had risen through the party ranks with no clue about Northern Ireland, said Mr McCarthy. “To come here without even primitive knowledge reflects very badly on the prime minister and the Conservative party.”

Stephanie Lyons (41) a civil servant, said she was not surprised. “A lot of English people don’t know how things are here. But you would expect more from a politician,” she said.

Tom Neill (72) a former soldier, echoed a widespread view that Ms Bradley’s comments showed indifference to Northern Ireland. “The government in Westminster doesn’t give a damn about us.”

Several of those interviewed confessed their own ignorance about Bradley - they had no idea who she was until hearing about her startlingly frank interview. “Not heard of her till today, to be honest,” said Michael Reynolds (73) a retired driving instructor.

This week the Northern Ireland secretary had won some plaudits for slashing the pay of members of the paralysed Stormont assembly, a long overdue move, according to many voters.

In the interview with House magazine Ms Bradley (47) said of Northern Ireland’s partisan politics: “That’s a very different world from the world I came from where in Staffordshire Moorlands I was fighting a Labour-held seat as a Conservative politician and I was trying to put forward why you would want to switch from voting Labour to voting Conservative.

“That is so incredibly different and it’s when you realise that, and you see that, that you can then start to understand some of the things that the politicians say and some of the rhetoric.”

The Troubles had shaped her view of Northern Ireland and she had no idea how wonderful and vibrant the region was, she said.

“I was slightly scared of Northern Ireland because of my impression and images from 20 years ago. That is not the place that it is today,” she said.

Several shoppers on Castle Street wondered if there was calculation, a hidden tactic, behind her apparent naivety. “Politicians are trained to lie,” said Johns Gibbs. “Maybe it’s like, ‘I’m stupid, forgive me’.”– Guardian