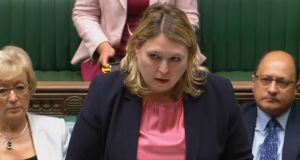 Northern Secretary Karen Bradley speaking in the Commons on Thursday. She said the salaries of the North’s Assembly members would be reduced from £49,500 to £35,888 because they were not performing all their functions. Photograph: PA Wire

Northern Ireland civil servants are to be handed sweeping executive powers normally exercised by politicians in the latest response by the British government to the Stormont deadlock.

Legislation will be introduced after the autumn party conference season in England to allow civil servants to take key decisions to address the North’s political paralysis, Northern Secretary Karen Bradley announced in the House of Commons on Thursday.

“I recognise that there is a need to provide reassurance and clarity to both the Northern Ireland civil service and the people of Northern Ireland on the mechanisms for the continued delivery of public services,” she said.

Ms Bradley appeared to have been compelled to make her move following a Belfast Court of Appeal ruling banning the construction of a £240 million incinerator at Mallusk in Co Antrim. The wording of that ruling created a legal situation where, in the absence of ministers, civil servants could not take major executive decisions.

Numerous large projects such as the £77.5 million refurbishment of the GAA Casement Park in Belfast and a multi-million pound new office block, cruiser terminal and power station planned for Belfast Harbour are being held up because of the January 2017 collapse of the powersharing Northern executive.

Thousands of jobs and more than £1 billion of infrastructural projects are threatened due to the political impasse, according to the North’s Institute of Directors.

Moreover, important appointments to bodies such as the North’s Policing Board are blocked because of the logjam.

“The legislation I intend to introduce after the conference recess will also include provisions to give greater clarity and certainty to enable Northern Ireland departments to continue to take decisions in Northern Ireland in the public interest and to ensure the continued delivery of public services.”

Ms Bradley also announced that because of the crash of Stormont, Assembly members’ pay would be cut from £49,500 to £35,888. This will take place in two stages, in November and January.

Ms Bradley in her statement also took action to ensure that she would not be compelled to call fresh Assembly elections.

Sinn Féin’s Northern leader Michelle O’Neill and others claimed Ms Bradley was forced to issue her statement as she faced an imminent judicial review to require her under current legislation to call Assembly elections.

Ms Bradley opened up the possibility of an independent chair being appointed to try to persuade chiefly the DUP and Sinn Féin to resolve outstanding differences over issues such as the Irish language and same-sex marriage.

But such is the level of disagreement between the two parties, amplified by the difficulties posed by Brexit and the Renewable Heat Incentive inquiry – which is causing particular distress to the DUP – that there is little hope this initiative will yield positive results in the short term.

That was reflected by a statement from Minister for Foreign Affairs Simon Coveney that was short of any signs of optimism. He “noted” Ms Bradley’s announcement on Assembly elections.