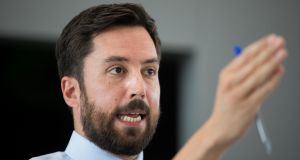 Describing the number of families in emergency accommodation in some local authority areas as “unacceptable”, Minister for Housing Eoghan Murphy revealed he had written to a number of unnamed councils and told them they need to make immediate changes. Photograph: Tom Honan/The Irish Times.

Minister for Housing Eoghan Murphy has threatened to use “emergency powers” under the housing acts to strip certain local authorities of their powers to provide emergency accommodation and transfer the responsibility to his department.

Mr Murphy made the dramatic intervention at the Fine Gael parliamentary party’s think-in in Galway, as the political pressure on the Government over the housing crisis increased.

Describing the number of families in emergency accommodation in some local authority areas as “unacceptable”, he revealed he had written to a number of unnamed councils and told them they need to make immediate changes.

“And if they don’t I will have recourse to emergency powers within my department to step in and take control of some of those functions.”

Asked to elaborate, Mr Murphy said: “There are certain local authorities that haven’t put in place family hubs - we know family hubs are the best response, not hotels.”

Mr Murphy, who has been under sustained criticism as homeless figures continue to rise, declined to name the local authorities, though they are understood to be the four councils in the greater Dublin area. However, it is understood that Mr Murphy’s officials have identified different failings in each area.

He said that he would await their responses, and that he had asked them to reply by the end of this week.

However, he said that he had been hearing “excuses”, which were “unacceptable”.

Earlier, Taoiseach Leo Varadkar defended Government’s record on housing but said there were no “quick fixes” and that the budget would be about much more than just housing.

Speaking to Fine Gael TDs and senators, Mr Varadkar said that the Government would bring forward proposals next week for a Land Development Agency, which he said would be “a step change in the Government’s involvement in the housing market”.

“We are going to build new homes and lots of them - social housing, affordable housing, private housing and cost rental housing on state owned land and privately owned land,” he said.

He said the establishment of the new agency would be as significant as the decisions to establish “the ESB, Aer Lingus or the IDA.”

In response to opposition demands for a “housing budget” Mr Varadkar said “a budget has to be comprehensive, it can’t be just about any one problem.

“I think we would be letting people down if the budget was just about any one thing, because that’s to ignore everything else. There are lots of issues in our society that need to be dealt with,” he said.

Mr Varadkar said that he can “understand why people are sceptical but if there was a quick fix solution to this problem I think other people or other parties would have put that forward by now - would have published it, would have defended it, would have brought it through the Dáil for example, we don’t have a majority in the Dáil, the opposition does. The truth is there is no quick fix. I think the vast majority of people do understand that.”

The event in Galway continues today.