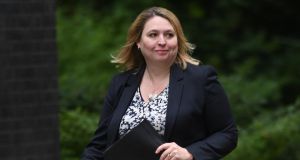 The Tánaiste has said Northern Ireland secretary Karen Bradley is a smart and experienced politician after she admitted she initially did not understand the North’s politics when she took on her brief.

Ms Bradley, who will be working closely with the Government in the coming weeks in an effort to kick-start talks on restoring powersharing at Stormont, said that when she was appointed to the role, earlier this year, she did not realise that nationalists did not vote for unionist parties or vice versa.

Sinn Féin said her comments were a reminder of where the North comes in the British government’s priorities, but Downing Street insisted that the prime minister, Theresa May, retains confidence in Ms Bradley.

Tánaiste and Minister for Foreign Affairs Simon Coveney said Ms Bradley had “really made an effort to understand Northern Ireland” since taking the role. “She didn’t have a lot of experience of Northern Ireland before being appointed there, but she’s an experienced, very smart politician, and I’m going to work closely with her to help the parties in Northern Ireland to work with each other in a way that’s good for people in Northern Ireland,” he said.

“Whether you’re a unionist or a nationalist, having no devolved government structures, having no capacity to make political decisions in Northern Ireland, is bad for everybody, both communities. Karen Bradley recognises that. So do I.”

Ms Bradley also said she did not fathom some of the deep-rooted issues that define Northern Irish politics when she was first appointed.

Sinn Féin’s former Stormont finance minister Máirtín Ó Muilleoir said he had gone “beyond being shocked by the British government’s ignorance of affairs” in the North. “When it comes to appointing their representative in Belfast, the only requirement was that that person would take the orders of Theresa May, who of course is taking her orders from the DUP.” – PA