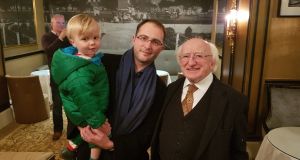 President Michael D Higgins has spoken of his vision for a “value-based politics” and a future “imagined together” which is not limited by the “boundaries of nation”.

Addressing a homecoming in Galway on Sunday night attended by several hundred people, following his re-election last weekend, Mr Higgins spoke of values of “respect, participation and transformation”, and the “challenges” facing the planet, which had been endangered by “practices which are only 150 years old”.

“We are all listening to a better music of the heart,” he said, while also acknowledging he was “honoured, privileged and humbled” to be President for the next seven years.

It was “not acceptable for institutions in the 21st-century to be run in a 19th-century way”, Mr Higgins said, adding that the world was “now at the point of making great choices”.

Democracy could either be “undermined by xenophobia and hatred”, or “deepened” by changing institutions into more respectful and participatory entities, he said.

He recalled how when he was first elected President in 2011, he and his wife Sabina had travelled through an Ireland where people had “broken expectations” and were facing “the hard end of an austerity regime” after the Troika.

“There was an atmosphere around that people might lose trust in the political system,” he recalled. However, in this recent presidential campaign, young people had said “no” to “cynics” and “yes” to transformation, he said, and had opted to become the “arrows rather than targets of change”.

Mr Higgins said he believed a “new kind of campaign” had influenced the support he secured in 40 constituencies in the October 26th presidential vote.

He paid tribute to all those who had worked for him, including those who had been with him during his 40 years in politics with the Labour Party, and the members of the Social Democrats, Fine Gael, Fianna Fáil and Green Party who had also supported him.

He said that in his inauguration speech he would address the definition of the republic as a “set of communities of vulnerabilities, as well as capacities”.

Mr Higgins extolled the unique foresight of artists, who could always envision “possibilities for the future” long before everyone else, and paid tribute to the “strength of the feminist movement”.

He said there was an opportunity to define a “real participatory republic” with values of sustainability, in a world where it was “not inevitable” that thousands of people should die daily of hunger.

With “value-based politics”, he said, “those marching to these values will have different tunes but it is in the same direction we are going . . . a shared, participatory world which is not divided”.

Mr Higgins, his wife Sabina and family were greeted at the event with a standing ovation by Labour Mayor of Galway Niall McNelis, Fine Gael TD Hildegarde Naughton, and supporters and canvassers who worked with the Galway for Higgins campaign – a cross-party initiative .

The youngest supporter present was Myles Kelly, all of 2 years old, from Renmore, in the company of his father, Maxim Kelly (38).

Music was provided by Trad on the Prom, Michelle Lally, and Eleanor Shanley, among others, and master of ceremonies was performer and playwright Little John Nee. He recalled hearing Mr Higgins, a then senator, speaking in the North Star Hotel in Dublin in 1984, and noted how his encouragement for artists had translated into the best investment ever in the arts in subsequent years.

“In these times, one can be overwhelmed by the rhetoric of Donald Trump. but one can always go to president.ie and that will cure you,” Nee said. “We are the luckiest nation on Earth to have not only the best President, but Sabina also,” he said, to loud applause.

Labour’s Galway West branch chair Dr Andrew Ó Baoill paid tribute to an electorate which had returned a “cosmopolitan, creative and intellectually curious” President, who represented the “immigrant and emigrant, settled and Traveller, the young and old”.