Hill of Tara is ‘in a mess’, TD claims 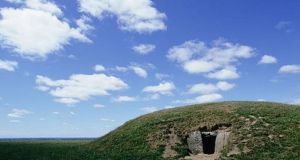 In 2017 an estimated 200,000 people visited the Hill of Tara in Co Meath. Photograph: Getty Images

A conservation plan is being developed for the Hill of Tara which is struggling to cope with the increasing number of visitors to the 5,000-year-old site.

Minister for Heritage Josepha Madigan has said a plan is expected to be ready by mid-summer, and she acknowledged that “critical amenity structures” had to be dealt with at the site of the ancient seat of the high kings of Ireland.

Ms Madigan stressed the role of her department through the Office of Public Works (OPW) was the conservation of the 100-acre site which has 150 recorded archaeological monuments. She described Tara as the “symbolic capital of Ireland”.

The OPW is leading the working group to develop what will be a five- to 10-year policy plan, with other stakeholders including Meath County Council, the Heritage Council and the Discovery programme.

However, Ms Madigan said the plan “will not, nor is it intended to, address land use and planning issues in the wider environs of Tara”. Issues such as parking and traffic management were the responsibility of Meath County Council, but the OPW would assist the council in every way possible.

Sinn Féin TD for Meath West Peadar Tóibín has raised concerns about the state of the site, saying it was “not in a fit state” for the number of visitors it received.

Mr Tóibín said the “Hill of Tara is in a mess”. Parking was a major issue, and a field was currently being used to accommodate vehicles.

He said an estimated 1,000 buses travelled to Tara every year, and found it extremely difficult to navigate the area.

“The hill itself is increasingly mucky. The rath on which the Lia Fáil [an upstanding stone said to be the coronation stone for the high kings] stands is flooded throughout the year. There are no pathways of any sort.”

There were also archaeological worries about the introduction of pathways on the hill itself, “but the ground is currently being torn up by people”, said Mr Tóibín.

He said there had to be extra focus outside the OPW site because there were planning issues with “the lack of capacity, toilets, shops and restaurants”.