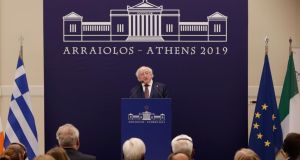 President Michael D Higgins has urged Turkey “to seek an alternative negotiated approach, one that avoids military intervention and its resulting humanitarian agony and distress”, regarding its “unilateral intervention” in Syria.

“I share my colleagues’ deep concern at what is happening in northern Syria. I am appalled by any possibility of coercion or forced returns of refugees and underline in the strongest terms that any attempt at demographic change is not acceptable,” he told a meeting of European Union heads of state in Athens, reiterating his concern for the “vulnerability of the Kurdish people”.

Mr Higgins was participating – for the first time – in the annual meeting of the Arraiolos group, an informal forum of EU presidents. Counterparts from Bulgaria, Croatia, Estonia, Germany, Hungary, Italy, Latvia, Malta, Poland, Portugal and Slovenia, in addition to the host country, Greece, also took part.

This year’s meeting discussed joint efforts to consolidate European integration, specifically in regard to economic issues, the refugee crisis and security challenges.

Mr Higgins assured the presidential gathering of the “solidarity of the people of Ireland with the Jewish community and the people of Germany” following the synagogue attack in Halle earlier this week.

The President also held bilateral meetings with his Estonian, Latvian and Slovenian presidential counterparts. After her meeting with Mr Higgins, the Estonian president, Kersti Kaljulaid, tweeted that she “got a real insight to how [the] people of Ireland see and feel Brexit”.

Mr Higgins also addressed the subject of migration. “Migration brings with it an abundance of positives, not least the evidence that 10 to 12 per cent of global GDP is provided by migrants,” he said.

“We were never a sedentary planet. No economy can function without migrants. They provide essential, frontline services, and it has been shown empirically that migrants are net contributors to their adopted home country within three years of settling,” he added, referring to a recent UK study.

Mr Higgins also said the widespread adoption of an “ecological-social model” is “not only an important gesture towards intergenerational solidarity” but “is our only hope to avoid ecological and social catastrophe”.

“The mere placing of an ecological or social gloss on our existing economic paradigm, a mere refinement of that which exists, which has been proposed by many as a solution to the ecological and inequality crises we face, is simply insufficient. Indeed, it is at best a distraction from the challenges at hand,” he added.

Turning to security, the President asked: “Is it not nothing less than a moral outrage that our boundless capacity for creativity and innovation, and the fruits of new science and technology, are turned not to the promotion and preservation of peace but to the pursuit and prosecution of war?”

During the Arraiolos meeting, it was announced that the Greek president, Prokopis Pavlopoulos, had accepted an invitation from Mr Higgins to make a state visit to Ireland early next year.

On Sunday, Mr Higgins will depart on a four-day state visit to Cyprus.