Brexit: Suddenly, it looks as though pigs might actually fly

Most had predicted that talks on a deal would break down, but that’s all changed utterly 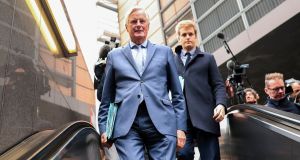 Suddenly, in the space of a few hours, everything changed.

When Taoiseach Leo Varadkar emerged from his lengthy meeting with British prime minister Boris Johnson near Liverpool on Thursday afternoon, few observers had any expectations that the two men would report any progress.

Several British media outlets had predicted that the talks between the EU and the UK would collapse before the weekend. Some suggested that Johnson would not attend the summit of EU leaders scheduled for next Thursday and Friday in Brussels, while other reports in Brussels said that EU leaders were prepared for a dramatic Johnson walk-out.

On the day before the summit, a senior Irish Government source speculated on the chances of a deal. “Pigs might fly,” he said.

But, as we know now, that’s not what happened. The two men spent about three hours together – some of it with their senior officials, some of it with just each other – and some sort of very significant breakthrough took place. When the meeting concluded, they released a joint statement which said they had “agreed they could see a pathway to a possible deal”.

Dublin does not negotiate the terms of the UK exit, of course. But one can’t be agreed without Dublin’s assent.

And Dublin was now saying that there could be a deal before the Brexit date at the end of October.

Pigs might not be exactly flying yet, but they were certainly snuffling their way towards the runway.

So what happened? Both sides have agreed not to brief about the exchanges between the two men, or the nature of any breakthrough, conscious that transparency has sometimes been the enemy of progress in the Brexit negotiations in the past. The shutters have come down pretty abruptly.

However, it is understood that part of the picture is a move by the British on customs. This is thought to be a reworking of the joint customs partnership proposal by Theresa May into a Northern Ireland-specific version – allowing the North to leave the EU customs union, but apply its administrative rules.

Crucially for Dublin, those rules would be applied – in tandem with the regulatory checks already suggested by London – between the North and the rest of the UK.

In other words, there would be customs and regulatory checks on goods coming into Ireland – but they wouldn’t take place on the island (or, at least, outside northern ports).

If the two big difficulties on the EU side before the meeting were customs and consent (for Stormont on different arrangements for the North than the rest of the UK), after the meeting, the difficulties were suddenly no longer insurmountable.

But will they be surmounted? The EU will have two major concerns. It will need to be content not only that the proposal is workable in practice to adequately protect the integrity of the EU single market (worked example: chlorinated chicken), but also that if it agrees a new deal with a new British government, that this one can secure parliamentary ratification.

On the face of it, that’s quite a challenge. It must be doubtful that Johnson can keep his own hardliners, plus the DUP, plus the Tory rebels and the necessary handful of Labour MPs on board to save him and deliver his deal.

But he apparently thinks he can. One of the few things Irish Government sources have been prepared to say about the talks with the British is that the Johnson team is confident that it can get a deal ratified.

Most sources with a reasonable claim to know at least some of what is going on believe it is real, and there is now a chance of a deal

Following the meeting between chief Brexit negotiator Michel Barnier and Brexit secretary Steve Barclay on Friday morning – in its own way as significant as the Varadkar-Johnson meeting – the two sides have agreed that the talks between EU and UK negotiators should move into a period of “intensive discussions”.

This is not formally the negotiating “tunnel” from which no signals emerge until a deal is done, but it is clearly heading in that direction.

Few think that a deal will be concluded by next week’s summit – and everyone is aware that it could all come to nothing in the end – but several sources were cautiously optimistic that an agreement could be concluded by the end of October, in time for the UK to leave by the deadline.

This will require the UK to supply details about how the regulatory and customs checks on the Irish Sea would work, and for the EU to be satisfied that they are sufficient to protect the single market and customs union.

Even then, it might not work. Some voices – on both sides – warn that this could be just another exercise in managing the blame game. If so, it is an extremely elaborate one. Most sources with a reasonable claim to know at least some of what is going on believe it is real, and there is now a chance of a deal.

Few are willing to express confidence it will work out.

But they do believe that the game is on.