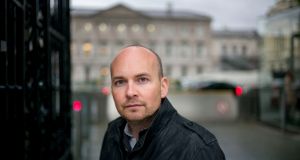 Paul Murphy: ‘I have been contacted by a lot of people that I know from the past from different movements and different protests saying, “I think you’re doing the right thing.”’ Photograph: John Ohle for The Irish Times

It has been something of a hectic 10 days for Paul Murphy.

Last Thursday week, the Dublin South West TD announced he was leaving the Socialist Party following an intensive year-long debate about the extent to which it should co-operate and forge alliances with other left-wing parties and social movements.

Last Monday, he held a press conference in Buswells Hotel to announce he was launching a new group called Rise, comprised of former members of the Socialist Party. It is not registering as a political party and will focus more on getting involved with broad left-wing and grassroots campaigns.

The name stands for Radical, Internationalist, Socialist, Environmentalist and its candidates will stand in elections under the Solidarity-People Before Profit banner.

While Rise largely shares a lot of the same politics as the Socialist Party, they differ in two key areas. For one thing, the environment is central to Rise’s political vision. In the coming weeks, Rise will announce details of its Green New Deal, a series of proposals designed to deal with the climate crisis.

Additionally, Rise is in favour of working alongside other left-wing parties and groups to help build a broader left movement. It was this strategic position that left Murphy at odds with other members of the Socialist Party and ultimately led to the split.

In his parliamentary office three days after the launch of Rise, Murphy is very much in a mode of transition and planning. Not only is he putting together the mechanics for the new group, he is also establishing a new Dáil and constituency operation and training new staff members.

Keycards must be acquired, Garda vetting forms filled out. On top of all that, he is trying to keep abreast of Dáil sittings, committee meetings and constituency casework. “It’s been a really busy and tiring week,” he laughs.

Rise is still in its infancy. Much remains to be decided, including the rules to govern how Rise will be led, and who will be allowed to join it, but Murphy is pleased with the reception he has received.

“People are really positive,” he says. “I have been contacted by a lot of people that I know just from the past from different movements and different protests saying, ‘I think you’re doing the right thing.’”

Rise has already branded itself differently from the Socialist Party. “Trying to unpack for people what’s different about Rise and trying to get a message across that’s clear . . . I think that went reasonably well for us.”

That said, the formation of Rise has been greeted with a degree of scepticism from those who see it as further evidence of division on the left. On social media, comparisons were made between it and the People’s Front of Judea, the well-vented Monty Python’s Life of Brian trope.

Murphy acknowledges that the left is “very splintered” but is weary of its internal debates being viewed as “some students’ union joke thing”.

He says the fact the left is often mocked for “referencing historical stuff” illustrates the “low intellectual cultural level of politics in Ireland”. He does, however, acknowledge that the rhetoric used by the left can be alienating.

“Any specialist subject has jargon,” he says. “Jargon develops because you need precise words for things when you’re really into something. Like science or whatever. So yes, we have internal jargon and one of the things we have to do as socialists is turn that jargon into language ordinary people can understand.”

On paper, nothing about Murphy’s upbringing would suggest that he was destined to become a socialist. He grew up in Goatstown in south Dublin and attended two fee-paying secondary schools. He first started identifying as a socialist at the age of 15, having been politicised by a series of anti-capitalist, anti-globalist protests that were taking place at the time, including the Battle of Seattle.

“I remember I had a poster up on my wall of all these police in the US guarding a Nike shop at this big protest in Seattle,” he recalls.

From there, he read the likes of Connolly, Marx, and Trotsky and concluded that there was “something really mad about how society is organised”.

He later joined the Socialist Party and got involved in various protest movements, including the anti-war and Shell2Sea campaigns.

On the day we meet, he nips down to Leinster House to attend a hastily organised rally opposing a proposed liquefied natural gas facility in the Shannon estuary. Members of various environmental activist groups, including Extinction Rebellion and Not Here, Not Anywhere, are present, as is Green Party leader Eamon Ryan.

Though he acknowledges the left hasn’t “foregrounded the environment in the way that it should have”, Murphy bristles at the idea his renewed interest in the environment is a response to the Green Party’s recent electoral success.

“I have been involved in environmental struggles in the time I have been active since I was 15,” he says. “I was heavily involved in Rossport. While the Green Party was in government overseeing the imposition of this onshore refinery, I was getting kicked around by the gardaí in Rossport.”

Instead, he says he has been inspired and mobilised by the wider climate change movement. He also credits his wife, a climate scientist and socialist activist, with giving him greater awareness of the issue and advising him on what to read.

Murphy is aware the Greens have succeeded in attracting young people who have been newly politicised by the climate crisis. However, he predicts ructions should the party consider entering into a coalition government with Fianna Fáil or Fine Gael.

I have a lot of sadness about not being in the Socialist Party anymore. I joined it when I was 18

“I don’t have much question that Eamon Ryan would be jumping at the chance to do that. And I think that people like Saoirse McHugh, from what she said, won’t be. I think that will be a really important debate.

“The evidence is there that going into coalition with right-wing parties does not result in left-wing policies being implemented. It results in people being demoralised and disillusioned in your supposedly left or green movement. It doesn’t work. It’s the illusion of power. It’s not actual power.”

Speaking to Murphy, it is clear that it has been a bruising year, and he describes his departure from the Socialist Party as bittersweet.

He now has “a renewed enthusiasm and appetite” for his work and is eager to see how Rise pans out. In the coming weeks, he hopes to have a discussion with other left-wing parties about a byelection strategy, which would see the left uniting behind one candidate in each constituency.