Leaks, bluster and secret talks: The inside story of a pivotal week in Brexit 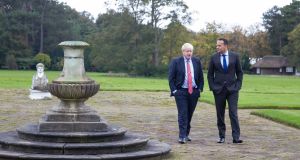 Climbers on the notorious north face of the Eiger in Switzerland often battle against ferocious life-threatening storms while the village of Grindelwald less than 2km below basks in sunshine and gentle breezes.

The Brexit talks were a little like that this week, with the political storms telling only part of the story. Something else was also afoot, something calmer, more deliberate and so lacking in drama that it passed unnoticed.

When Boris Johnson disclosed his “two borders, four years” Brexit plan at the Conservatives’ conference on October 2nd, it was met with negativity.

Immediately, Tánaiste Simon Coveney said: “It does not seem like the basis of an agreement, that’s for sure.” Similar reactions came from EU chief Brexit negotiator Michel Barnier and EU Commission president Jean-Claude Juncker.

“It was an unusual day that Wednesday,” said a highly-placed Government source. “There were conflicting messages coming from Downing Street. We got briefings in the morning, a request for a phone call from Boris Johnson, and a conversation where the British indicated it was their clear intention to get a deal.”

That divergent narrative from Downing Street would continue for the next eight days.

The more declamatory stuff that emerged was believed to reflect the position of Dominic Cummings, the Downing Street chief of staff. It included the leak to James Forsyth of The Spectator which cast Taoiseach Leo Varadkar as the villain of the piece, as well the unprecedented decision of Downing Street to crudely paraphrase German chancellor Angela Merkel’s stance on the customs issue.

“That was Beano and Dandy stuff, comic book fantasy. It was a disgrace,” said a senior Opposition figure. The effect of it was obvious. By the time the pivotal meeting between Varadkar and Johnson was arranged the blame game was well established, and the bilateral summit portrayed as a “last throw of the dice”. If there was mood music, it was Mozart’s funeral requiem.

But in private, engagement was intensifying between the Irish and British governments on a far more considered basis. Despite Boris’s blowhard bluster, there had been some movement in the British position since he became prime minister. For example, Johnson told middle-of-the-road Tories he would not include a no-deal Brexit in the party’s election manifesto. He also convinced the DUP to agree to Northern Ireland remaining in the single market. Even his “two borders, four years” proposal was not that clear-cut. Seasoned negotiators like Bertie Ahern could not help but notice the ambiguous language in it.

“He was saying that Northern Ireland would be fully part of UK custom territory at the end of transition, or beyond,” Ahern told The Irish Times.

“I read from that he was prepared to leave the customs situation as is until the end of 2020 or longer.

“If he was prepared to do that and acknowledge that Northern Ireland could stay within the EU customs union during that period that was altering the whole ethos of the backstop.

“He was leaving space for the customs arrangement to remain without a definite end date.”

The behind-the-scenes engagement was busying up. Two officials had secretly travelled from Downing Street to talk to the Department of the Taoiseach’s second secretary general John Callinan, the Taoiseach’s point person on Brexit. When their presence was reported in the London Times it led to a furious row in the Dáil. Two other highly skilled officials from the Taoiseach’s office, the State’s top civil servant Martin Fraser and assistant secretary Helen Blake, were also now fully involved.

Meanwhile, Coveney had cultivated strong relations with the impressive new Northern Secretary Julian Smith, and was also liaising with Barnier and the EU Brexit negotiations taskforce. The British embassy in Dublin was communicating with the Departments of the Taoiseach and Foreign Affairs on a daily basis.

“The messages coming from Downing Street were not clear-cut. We spent a lot of time dealing with the aftermath of the proposal and other events [the leaked memo to The Spectator; the Angela Merkel leak],” said the Government source.

“What was clear [was] that the noise emanating from the media was not [the] direction of travel we were being told about. We were assured they wanted a deal,” said the source.

“The meeting [between Varadkar and Johnson] was on the cards from before the weekend but was only really firmed up the day before.

“We discussed a number of venues, including Edinburgh and Manchester. We did not want to go to Downing Street. We wanted a venue that could be considered neutral. In the end we chose Liverpool as we could meet halfway between Dublin and London,” The Irish Times was told by the source.

At this stage, there were two clear obstacles: consent in Northern Ireland and customs. Consent was considered doable; the big wrangle would be over customs. However, on the eve of the meeting this reporter met a very senior figure in Government who expressed optimism that a deal was possible. Given the bleak coverage of the issue, it seemed like wishful thinking.

The Irish delegation comprised of 10 people, including Callinan, Fraser, Blake and the Taoiseach’s special adviser Brian Murphy. There was a frisson of nervousness in relation to the outcome of the meeting.

“To be honest, the expectations going over were uncertain and unclear, especially given the briefings that were emanating from Downing Street,” said the source.

The meeting was unusual. It was the third meeting between the two leaders, but unlike the others, where the one-on-one encounters lasted no more than 15 minutes, this continued for three hours.

The two leaders have built up a relatively cordial relationship, which was obvious in their body language. While Varadkar was prepared to listen (and, possibly, to compromise) the understanding was that it was the British who needed to move. “Boris needed to blink first, and he did,” said another Government source familiar with what happened.

It was also unusual as the first time the State did not delegate the primary negotiations to the EU, although everything that occurred before and after was relayed to, and approved by, Barnier.

“Officials from [the Departments of] Foreign Affairs and [the] Taoiseach were in constant contact with the taskforce prior to the meeting and after the meeting. The Taoiseach appraised Barnier afterwards too,” said the source.

In the end a form of Northern Ireland-only backstop formed the basis of the resolution. Details of it emerged late on Friday afternoon. There was no doubt this was a breakthrough moment. The news was met with astonishment. The Government was anxious to keep it in proportion. “Many is the slip betwixt cup and lip,” Varadkar reminded his audience at a press conference later on Wednesday.

“We have to stay level-headed. We are heading into the tunnel but that does not mean a deal. It’s important not to underestimate the difficulties that lie ahead,” was the source’s conclusion on where things stand now.