Higgins stays above the fray as presidential non-contest limps on

The President is replaying the Mary McAleese playbook of 2004, from setting the agenda to laying down the rules of engagement 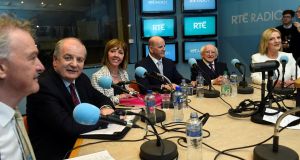 The 2018 presidential election campaign is often compared to the campaign of seven years ago. But for a more appropriate comparison, go back another seven years to 2004.

Of course there was no election back then. No candidate emerged to challenge Mary McAleese, so she was re-elected unopposed. But her playbook, and the narrative of what ensued in that non-election, are uncannily similar to what has been happening this time round, right down to it being a non-election.

For one, the iron law of incumbency applies to this largely titular role more than any other public position in Irish life. Not only is the president above politics, he or she is seemingly above criticism as well.

McAleese waited until the last minute (September 2004) before confirming an interest in the second term. It left any challenger at a disadvantage, having little time to mount an effective campaign.

For the potential contenders, it was all over. Eamon Ryan of the Green Party indicated he was interested in running but could not muster support outside his own party. Dana Rosemary Scallon sought backing from four councils but only got one, Galway. An environmental campaigner, Vincent Salafia, also got nowhere.

Interestingly, then Labour leader Pat Rabbitte started to make encouraging noises about the Green Party’s Ryan, suggesting his party might just back him. But Labour already had a ready-to-go and willing candidate in the wings. But that candidate could not get the backing of its executive council, failing by a single vote. His supporters questioned whether it was appropriate for a president to stay in the Áras for 14 years. And who was the disappointed politician?

None other than Michael D Higgins.

In 2004, a commentator, obviously with a cracked crystal ball, summed up his fate thus: “Poor Michael D. With a wilted spirit and precious little fire left in his belly, it was a sad and turbulent day as he came to terms with the reality that he is highly unlikely ever to be taking up position in some cosy little nook at Áras an Uachtaráin.”

Now, 14 years later, he’s replaying the McAleese playbook from setting the agenda to laying down the rules of engagement.

Higgins is a well-liked President but his popularity never really soared like McAleese. There are a couple of questions that have nibbled at the public consciousness: his promise to serve only one term; his age; and (more recently) expenses, costs and value-for-money questions about his office.

How do you characterise the nature of the contest between the incumbent and his rivals? The closest comparison you could think of was the match between the Dublin senior footballers and TG4’s the Underdogs in Parnell Park on Friday night.

Here was a proven All-Ireland champion up against rivals who had never stood for public office in their lives or had pulled on a county jersey in championship politics. The exception was Liadh Ní Riada of Sinn Féin but she has only been a MEP for four years, making her a relative novice.

To compound the difficulties, three of them were panellists from Dragon’s Den, each diluting each other’s appeal. You could sense Gavin Duffy’s frustration when he announced that he had no idea that the other two would be in the field. Besides, would Seán Gallagher’s pro-business message from seven years ago butter any parsnips now?

Gallagher, who had led the field for so long in 2011, and is seen as the proxy Fianna Fáil candidate, barely crept into double figures in The Irish Times Ipsos MRBI poll.

Each of the candidates produced positive, worthy and (at times) novel political platforms. Senator Joan Freeman had impressive ideas on how the Áras could be used to promote better mental health, wellness, mindfulness and less digital dependency.

But her problem – and that of her fellow candidates – is that the nature of these contests isn’t to discover a candidate’s ideas but to uncover his or her potential flaws.

This campaign has not been as savage – yet, at least – as seven years ago but no candidate has been left unscathed. Freeman has spent at least half her time defending a loan she got from an American businessman, whose company was investigated for pyramid selling.

Duffy, meanwhile, was reminded of a serious accident for which he was at fault 40 years ago; Gallagher was quizzed about where he has been for the past seven years; Ní Riada was asked about the HPV vaccine and the inadequacy of the Sinn Féin in apology to sexual-abuse victim Máiría Cahill.

From the start, Higgins had his hand on the tiller. His presidential diary was unusually busy this summer compared to other summers, galvanising an already high profile. He also was able to control the number of broadcast debates he was involved in to just three. The decision by Gallagher not to participate in debates not involving all six played into Higgins’ hands. Instead of one glaring absentee, there were two missing candidates and that mitigated any PR damage it might do to Higgins.

And there was little surprise on Wednesday when The Irish Times Ipsos MRBI poll showed Higgins at almost 70 per cent, more than 50 per cent clear of his nearest rival. This wasn’t a contest. This was a procession.

The paradox of this non-contest is that the thrust of the campaign this week has centred around the candidate with the least public profile, Peter Casey. Did he introduce the comments about Travellers as a deliberate strategy? Probably not. The unfiltered nature of his comments is reminiscent of the US president Donald Trump. Instead of resiling, he doubled-down, and was accused of racism. It all came to a head on Thursday with a surreal visit (accompanied by a posse of media and gardaí­) to Cabra Bridge in Co Tipperary to view the unoccupied housing estate, which formed the core of his argument. The ruse backfired. He declined to meet the local family whom he had accused of being selfish. And then they arrived on site to make impassioned defences, accusing him of racism.

Casey has found it hard to move on from this issue. On Friday morning he issued a statement saying he was taking the weekend off to consider whether or not he would stay in the race.

And as all this happened, Higgins stayed above the fray. Not for the want of trying. After listening to Sean O’Rourke’s probing laser-guided interview with Higgins on RTÉ Radio on Friday, an astute political analyst texted to say he was “the cutest old fox in the forest”.

Higgins has come under some pressure this time, no more so than on the unaudited expenses allowance of €317,000 per annum. He has supplied some figures in relation to them but has refused to release full details until after the election. Opacity in the Áras is a big issue and there is little evidence that anything was done to address it during the President’s first term.

Another charge that has been made against him is that the number of his public appearances dipped significantly after his first year, 2012. This has been a claim of Casey’s in particular.

Higgins told O’Rourke that Casey had been running a “black advertisement” against him on that score. He said that after 2012 that he did not put “every single thing” in his diary.

The only reliable indicator available to the public is what is on the President’s website. And the evidence clearly suggests a dramatic fall-off in engagements.

Even if he did not put every single event in, it’s clear that the volume of public engagements dipped, especially in the middle years. The number for 2015 (115) is shockingly low but a source in the Áras suggested that the website was changed and failed to capture all public events. (But that is not really good enough, as this is how the public finds out what the President does.)

The other odd feature is that the number of public engagements suddenly rose again this year. And 2018 just happens to be an election year. Until the end of September, there were 227 events, compared to only 142 for the same nine months last year. August and September this year were particularly busy. The website records 38 public events compared to 29 last year, 26 in 2016. There were 29 events in August, compared to six last year and eight in 2016.

Perhaps this is just how the events fell. But like everything else in this non-election, it has all played handily into Higgins’ hands.

*A spokesman for Áras an Uachtaráin pointed out the correct number of public events in 2015 - again, these are the events to which media are invited - was 411 - 141 events at the Áras and 270 out of house.

“Following an upgrade to the website earlier this year, we are experiencing some issues with older entries, which we are addressing,” he said