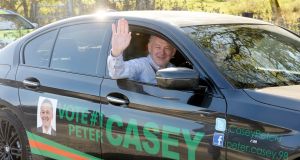 Presidential candidate Peter Casey has denied he made a mistake when he accused President Michael D Higgins of having objected to a Traveller halting site in Galway in 1968.

Galway City Council has been unable to shed light on the claim, made during the Virgin Media One presidential debate hosted by Pat Kenny on Wednesday night, despite Mr Casey claiming that the objection was “on the public record”.

However, a former Fianna Fáil mayor with a similar surname, businessman Michéal O hUiginn, has said that he was one of a majority of councillors who objected to plans by Galway’s local authority in 1968 to provide a hardstand in Rahoon, where Traveller families had been camped.

Mr Ó hUiginn noted that Mr Higgins was not on the council at the time, and he has no recollection of him being involved in what transpired at Rahoon. Both men were at university together, and both served terms as mayor of Galway.

Mr Ó hUiginn said the 1968 case was the one and only time he had objected to a halting site, and he had done so as there were concerns about its location next to a cemetery and in what was then a rural area on the outskirts of the city.

Mr Higgins was not living in the area at the time, having settled originally on the east side of the city before moving to Circular Road near Rahoon.

Galway Corporation’s plans in 1968 for a serviced halting site near Rahoon cemetery resulted in large protests, some of them violent. An Irish Times editorial at the time condemned discrimination against Travellers and coined the word “Rahoonery”.

A Galway City Council spokesman said that Mr Casey’s reference this week was “too vague”, and also pointed out that Mr Higgins was not an elected member of the local authority at the time.

The Galway Traveller Movement has said that Mr Higgins and his wife Sabina have been long-time supporters of Traveller issues, and challenged Mr Casey to provide evidence for his claim.

A spokeswoman for Mr Casey said the candidate stood by his claim, insisting that he had not confused names, and that it was “on the public record for journalists to check”.

Mr Casey would reveal more details on the day after the presidential election, or if Mr Higgins disclosed full details of his expenses, the spokeswoman said.

During Wednesday night’s debate, Mr Kenny had asked candidates if they would like members of the Travelling community to live next door to them.

Mr Higgins replied: “Yes, I have a halting site a couple of hundred yards from my house and they are wonderful people.”

Mr Casey suggested that Mr Higgins objected to a halting site near his home in 1968. Mr Higgins said that was inaccurate.

“I have never objected to a halting site,” Mr Higgins said. “I was an elected representative on Galway city and county council and I often took a stand, unpopularly, on the rights of Travelling people to be offered housing.”

In a separate development, the Galway City Community Network and Galway City Partnership have jointly condemned comments made by Independent city councillor Noel Larkin on radio on Thursday morning, in which he defended Mr Casey’s remarks this week on the Travelling community.

Galway City Partnership chief executive officer Declan Brassil said the incident was “particularly ironic and disappointing” given that Mr Larkin had signed a statement on human rights and equality which was endorsed by Labour Mayor of Galway Niall McNelis on Wednesday.

Mr Casey had claimed Travellers should not be recognised as an ethnic minority because they are “basically people camping in someone else’s land”.