Taoiseach Leo Varadkar told a press conference in Brussels how he held a copy of The Irish Times to EU leaders to emphasise the importance of the Border issue in Brexit discussions. Video: European Council 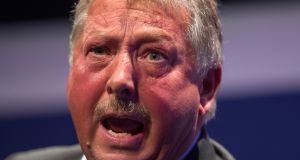 Sammy Wilson said Mr Varadkar’s behaviour was scraping the bottom of a “very deep barrel of threats, deception and rhetoric”.

The East Antrim MP Mr Wilson was responding to Mr Varadkar’s warning during this week’s EU summit that violence could again return if a hard Border was imposed in Ireland post-Brexit.

Mr Wilson said he had taken a “sledgehammer” to years of cross-border political relationship-building.

Addressing fellow EU leaders in Brussels, the Taoiseach related the story told this week in The Irish Times of an IRA bomb attack at a customs post in Newry, Co Down in 1972 that left nine people dead. Four customs officials, two lorry drivers and three IRA men died in the explosion at a customs clearing station.

Mr Varadkar brought a copy of The Irish Times, which featured an interview with a relative of one of the victims, to the meeting to emphasise the point.

Asked on Friday about the issue of a potential return to violence, Mr Varadkar said: “It’s not something that is going to be centre stage in the negotiations because the negotiations are very much about a solution and we’ve got to the point where they become very technical. But certainly it’s something that’s in the back of my mind as a potential consequence if we get this wrong.”

A spokesman for the Taoiseach said the priority of “the Taoiseach, the Government and all parties involved in the Brexit negotiations is to protect the peace process and avoid the return of a hard Border on the island of Ireland.

“The Taoiseach wanted to ensure that fellow European leaders fully realise what is at stake and the importance of preserving the peace process throughout the Brexit process”, he added.

However, Mr Wilson later claimed the Taoiseach had “lost any sense of self control” in relation to Brexit, claiming his previous warnings about the impact of a no-deal had made him a “laughing stock”.

“His latest use of a victim of the IRA who was killed when the republican terrorists blew up a border post scrapes the bottom of the very deep barrel of threats, deception and rhetoric which he has dipped into in order to persuade ignorant heads of EU states that the EU must insist in detaching Northern Ireland from the UK in any Brexit deal,” said Mr Wilson.

Friday’s incident is the latest fracture in the DUP’s deteriorating relationship with Dublin. The party believes the Government’s unwavering stance in relation to the need for a border backstop to guarantee free movement on the island is a veiled tactic to create separation between Northern Ireland and the rest of the UK.

DUP veteran Mr Wilson expressed concerns that “republican madmen” could be influenced by the Taoiseach “stirring up false fears” over violence.

Mr Wilson insisted there was no chance border checkpoints would be erected when the UK leaves the EU.

“His behaviour is despicable, low and rotten,” he said of the Taoiseach.

“He is not so stupid as to be unaware of the impact it can have especially given the record of republicans over the summer when they used impressionable young people to engage in sectarian attacks against the Protestant community in Londonderry.”

Mr Wilson said much progress had been made in forging better cross-border political links prior to Mr Varadkar becoming Taoiseach.

He added: “Leo Varadkar has taken a sledgehammer to the work which was done but even more worrying is his total disregard to the impact of his irresponsible and reckless rhetoric on the peace of Northern Ireland.”

Earlier, Mr Coveney denied the Government was scaremongering over claims violence could return if Brexit brings a hard border.

The Tánaiste said concerns about the potential to destabilise the island’s “very precious peace” were real, and reflected the fears of people living on the Border.

“We are not trying to scaremonger here, what we are trying to do here is protect a very precious peace and normality on the island of Ireland,” he told BBC Radio Ulster.

He added: “If you speak to families living on the Border area they will talk in very emotive terms about their fears of the re-emergence of that border infrastructure and it’s important to be honest about that.

“It doesn’t suit some people’s political narrative, it certainly doesn’t suit people who advocate for Brexit because this is a very awkward and difficult issue for people to deal with, but it’s the truth.” - additional reporting PA