Varadkar made appointments on Saturday following resignation of Denis Naughten 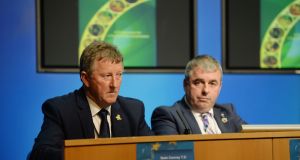 Mr Naughten resigned over a controversy about four private dinners he had with David McCourt, the key bidder in the broadband procurement process.

The appointments are subject to the approval of the Dáil and the Cabinet.

SEAN KYNE – Government Chief Whip and Minister for the Gaeltacht and Islands.

In the less than 48 hours after Naughten resigned and the Taoiseach named his success as Minister for Communications, speculation was rife that Seán Kyne was the obvious man for the job as Minister of State for Digital Development. Instead the low-key and unflappable 43-year-old has been appointed Government Chief Whip and Minister of State for the Gaeltacht and the Islands. While not a full senior Minister he will sit at the Cabinet table.

First elected to Galway West in 2011, it was his second attempt in the Gaeltacht constituency. Just as his predecessor Joe McHugh had done, he went to work on his Irish ,becoming fluent in the State’s first language before his successful run.

From Moycullen, Co Galway, he previously worked as an agri-environmental consultant and came to politics as a county councillor.

SEAN CANNEY – Minister of State for both Rural and Community Development and Communications, Climate Action and and Environment.

It is a long road without a turn for Sean Canney, who is unexpectedly back as a Minister of State just under 18 months after he vacated his OPW portfolio in his “rotation” deal with Kevin (Boxer) Moran.

When the Government came into office in 2016 they decided with a coin toss that Canney should take the job first for one year. Then he became deputy government chief whip. When Moran’s year was up Canney maintained the ministerial post should revert back to him, while Moran, a Longford-Westmeath Deputy, believed the agreement was that Mr Canney would have the job for one year only. The three other alliance members backed the Longford-Westmeath TD.

The Tuam/Dunmore-based TD is a chartered quantity surveyor, and formerly a lecturer at GMIT. He was elected to Galway County Council in 2004, and served as mayor in 2007-2008.

A steady rise through the political ranks has marked the career of the 47-year-old Donegal TD.

He first entered politics in 1999 as a county councillor for the Letterkenny area after two years as a geography and maths teacher in the town’s Loreto College and a stint teaching in the United Arab Emirates. Four years in local politics before another five as a Senator, and then election to the Dáil for the first time in 2007.

After seven years as a backbencher, including a time as chair of the British Irish Parliamentary Council, he was appointed as Minister of State in 2014 for Gaeltacht Affairs and for Natural Resources.

However, his appointment to the Gaeltacht by then taoiseach Enda Kenny sparked anger from the Irish language community because he did not have a command of the language. But he surprised the critics, becoming fluent and highly regarded in the role.

In 2016 he was appointed as Minister of State for Overseas Development and was a strong supporter of Varadkar in his campaign for taoiseach. He is married to former Fine Gael TD Olwyn Enright, who was also a key adviser to the Varadkar campaign.

The Department of Communications is fast becoming a poisoned chalice with crises erupting or bubbling away on broadband, climate change and sustainable water services.

But the long-serving outgoing Minister for Education has been a consistent poll topper in his Dublin Bay North constituency, where he was first elected in 1982. Considered a safe, steady and calm pair of hands, he is an assured public performer and effective defender of Fine Gael’s position on tricky and controversial issues.

A TD since 1982, he was appointed a Minister of State four years later in the then department of industry and commerce, before becoming Minister for Enterprise and Employment in the 1994-1997 rainbow coalition led by his brother John.

A research economist, he was Minister for Jobs, Enterprise and innovation in the last government, when he might have expected the finance portfolio but for his failed challenge to Enda Kenny’s leadership in 2010.