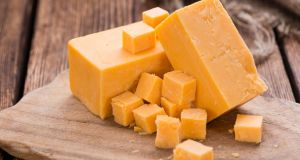 There are fears of a ’cheddar mountain’ in the event of a no-deal Brexit. Photograph: iStock

Three of the State’s largest milk processors are moving out of the manufacture of cheddar cheese because of fears over a no-deal Brexit.

Half of all manufactured cheese in the State goes to the UK and the cheddar market is worth most of the €367 million in dairy exports a year. Ireland accounts for 88 per cent of all UK cheddar imports.

Ireland and the UK are the only two countries where cheddar is consumed in Europe in large quantities and there are fears of a ’cheddar mountain’ in the event of a no-deal Brexit.

Dairy products will be hit with the highest tariffs in the event of a no-deal Brexit and there were real fears in March before the original deadline that would come to pass.

According to The Milk Board’s annual report, dairy sales of €1 billion to the UK increased by 6 per cent and now represent 26 per cent of all dairy exports.

The report reveals that 35 per cent of Northern Ireland’s annual milk supplies last year was processed in the Republic of which 92 per cent was made into manufactured dairy products.

Exports of dairy products globally exceeded €4 billion for the second year in succession and represent 33 per cent of all food and drink exports. The EU-26 accounted for €1.6 billion of dairy exports and the rest of the world a similar figure.

Exports of specialised nutritional powders, mostly for baby milk, increased to €1.1 billion of which half went to the Chinese market.

Ninety per cent of all dairy product in Ireland is exported though Ireland has the highest per capita consumption of fresh drinking milk in the world with an annual per capital consumption of 121 litres.

The report stresses that EU solidarity and financial support will be “critical to enable the State, its agricultural and food sectors, its economy and society to cope with adverse consequences of a possible disruptive no-deal exit of its largest trading customer from the EU, the customs union and the single market.”

Domestic milk supplies increased to a record 7.6 billion litres or by over 4 per cent on 2017 though the average milk price fell by almost 6 per cent. Dairy cow numbers increased by more than 3 per cent.

It was not a good year for dairy farmers with lower milk prices and higher costs from April on with an estimated drop of 34 per cent in farm incomes in the year.