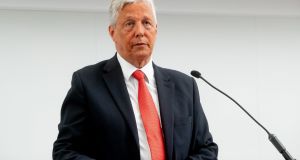 Former first minister of Northern Ireland Peter Robinson made his comments at an event at the Methodist Centre at Knock in east Belfast on Thursday. File photograph: Queen’s University Belfast/PA Wire

Former DUP first minister Peter Robinson has stated he believes Stormont can be restored but that in the meantime direct rule from Westminster should be introduced in Northern Ireland.

Speaking ahead of Saturday’s DUP conference the former party leader said that he could not care less about an Irish language act being introduced.

This proposal was one of the key issues that blocked a deal between the DUP and Sinn Féin being implemented early this year.

Mr Robinson made his comments at an event at the Methodist Centre at Knock in east Belfast on Thursday, as reported on the Eamonn Mallie website.

It was the same website that in February reported leaked details of proposals to break the impasse over the Irish language.

On Thursday, Mr Robinson said he wished the draft agreement had been leaked earlier to the website, arguing that had it been, many of the unionist fears about the Irish language would have been addressed.

He referred to some of the incorrect assertions and beliefs among some unionists at the time that there would quotas for Irish speakers joining the Northern Ireland civil service and Irish streets signs everywhere.

“I couldn’t care less about the Irish language. Let them speak it until they are green, white and orange in the face, as long as it doesn’t encroach on me,” he said.

Mr Robinson said it was “such a small issue” compared with devolving policing and justice and agreeing the conditions for the DUP-Sinn Féin-led Northern Executive of 2007.

“If people want to maintain the union it is necessary for us to have a stable government in Northern Ireland,” he advised.

In comments perhaps directed at some of his own party members he added, “You need to be careful not to allow the most vociferous voices in your party lead you.”

He still believed the Northern Executive could be restored, but in the meantime, he told his audience, direct rule should be introduced to Northern Ireland.

He said the challenge for the DUP and Sinn Féin and their leaders Arlene Foster and Michelle O’Neill was to reinstate Stormont. “You don’t get agreements without compromises,” he said.

On the issue of a united Ireland he noted how a former taoiseach told him that people in the South were not “chomping” for unity.

Mr Robinson also referred to his relationship with the late Martin McGuinness when they held the respective positions of first minister and deputy first minister.

“To operate you had to know what problems were being faced in each other’s party. I told him things I didn’t tell others, he did the same and neither of us betrayed the other’s trust,” he said.

Lyra McKee: The search for a lost body on Cave Hill