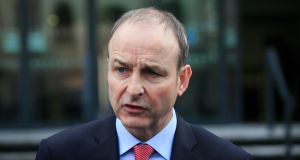 Fianna Fáil councillors in Donegal have written to party leader Micheál Martin expressing their opposition to any coalition with Fine Gael and the Green Party and calling for a national government as the best thing for the country and the party.

The chairman of the party’s Donegal councillors Patrick McGowan and the group’s whip Ciarán Brogan wrote to Mr Martin on behalf of their colleagues, warning that the party would be “destroyed” in the next local elections if it enters government with Fine Gael now.

“We have formed the deeply held view,” they say, “which we hope you will acknowledge and appreciate, that if Fianna Fáil now proceed to form a government with Fine Gael, we will:

2. Completely undermine our republican, historical and established principles which have served Fianna Fáil well since our formation;

3. Allow Sinn Féin to staunchly establish themselves as the main opposition party and alternative political or establishment force in waiting; and,

4. Cause our party to be destroyed in forthcoming electoral outings, losing many seats, presumably at the 2024 local elections.”

The group also says it is opposed to a coalition with the Green Party.

“Any move to include the Green Party and their urban-based and climate-centred agenda would further exacerbate the urban-rural divide and create further devastation to rural counties like Donegal,” they say.

The councillors warn that the Covid-19 pandemic and the measures taken to tackle the crisis mean that “unpalatable fiscal policy measures will have to be taken” by the next government.

“Such fiscal corrective measures will come with highly negative electoral consequences for the prescribers,” they warn.

“Having taken all of these factors on board, we feel the best option for Ireland and Fianna Fáil at present is to engage in constructing a national unity government. Such a government would include all of the political parties and groupings, which would be time-bound.

“Surely, if Fianna Fáil is interested in putting the country first, then such a proposal should be the only option under consideration. Additionally, it would have the benefit of insulating our party from electoral destruction at the next electoral contest,” they say.

Senior Fianna Fáil sources acknowledge that there is opposition to a coalition with Fine Gael and the Greens throughout the organisation, but say there is little evidence that it represents a majority view in the party.

Several Oireachtas members who have spoken to The Irish Times in recent weeks say they believe a coalition deal will ultimately be accepted by the party organisation, though they say there will undoubtedly be an internal party fight.

Under party rules, any coalition deal must be approved by a majority of the party’s members.

Although present Covid-19 restrictions mean that a special ard fheis is unlikely to be held, it is understood that other options such as regional voting centres or a postal ballot are under consideration.