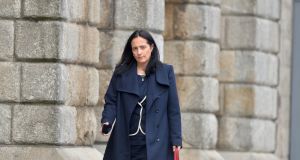 Green Party deputy leader Catherine Martin has said she is saddened that a number of younger members have decided to leave the party, saying it was incumbent that it addresses structural issues.

She was referring to the announcement on Thursday by some prominent younger members, including former Mayo general election candidate Saoirse McHugh, that they were leaving the Greens.

Ms Martin, who ran incumbent Eamon Ryan to within 50 votes in a surprisingly close leadership contest, told a press conference that the party needed to be inclusive of a variety of views and voices.

“Why are we losing good people, and what can we do to change that? Maybe we have to reform the party in some way,” she said.

Mr Ryan agreed, and said he would take the result on board. He acknowledged that the leadership election could have gone “either way”.

“Stick with us,” Ms Martin implored members who were considering leaving the party. “Whatever we need to get through, we’ll get through it together.”

Mr Ryan said he would reflect on the result and the issues that came up.

Ms McHugh’s move was not unexpected as she had repeatedly said she would leave the party if it entered government with Fianna Fáil and Fine Gael. She campaigned against the programme for government, which was endorsed by three-quarters of Green members in a party-wide vote.

In a Twitter thread on Thursday, Ms McHugh said the programme was “a terrible document”.

“The membership were told it contained certain things that it didn’t,” she wrote. “This Government, I believe (and I hope I’m wrong) will do massive damage to the idea of environmentalism by linking it with socially regressive policies.”

She said it would “turn my stomach” to remain in the Green Party.

Ms McHugh shot to prominence during the European Parliament elections last year when she narrowly failed to win a seat for the party in Connacht-Ulster. However, she has since failed to win a Dáil seat in the Mayo constituency in February, and then missed out on election to the Seanad.

“Only by viscerally improving people’s lives will support for climate action be ensured. Our problems in housing, tax avoidance, healthcare, agriculture etc are inextricably linked with and reinforce environmental breakdown and because of this solutions must be mutual,” she said, adding that she hoped a new group that has been formed within the Greens would “break off and form an actual eco-socialist party”.

In response to Mr Ryan’s reelection, Green Party MEPs Ciaran Cuffe and Grace O’Sullivan said it was time to foster a sense of unity in the party after “the past few eventful months”.

Ms O’Sullivan added that the party had gone from “strength to strength” since she and Mr Cuffe were elected as MEPs last year, and this was “testament to the hard work and determination of both Eamon and Catherine to rebuild the party and return it to a position of influence”.

Mr Cuffe said “an extraordinarily challenging period lies ahead”, but he was in no doubt that Mr Ryan’s “experience and commitment will allow him to address the challenges that we face”.