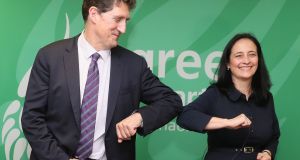 Eamon Ryan, who retained his leadership of the Green Party by 994 votes to 946, and deputy leader Catherine Martin in a Dublin hotel after the leadership contest result was announced. Photograph: Brian Lawless/PA Wire

Has the Green Party leadership issue been settled?

Well, Eamon Ryan has managed to retain his decade-long leadership but Catherine Martin ran him very close, with fewer than 50 of the near 2,000 votes between them.

“It was a really close result,” Ryan said in his acceptance speech. “There is no two ways about that. The result could have gone either way. I will reflect on that.”

The margin of victory – 994 votes to 946 – was a little too close for comfort and on that basis the pressure on Ryan’s leadership is unlikely to abate. However, Martin, for her part, pledged to fully support her colleague.

The result capped off a very strong two months for the deputy leader and likely reflects Martin receiving recognition for her role in steering the party through tough negotiations on the programme for government. The Dublin Rathdown TD, who is Minister for Media, Tourism, Arts, Culture, Sport and the Gaeltacht, is in a very strong position in the party now.

She is not leader but her calls for deep-seated structural reform – particularly around allegations of bullying – will have to be taken on board.

If it were the Tories, or even Fianna Fáil or Fine Gael, such a result would inevitably lead to a cascade of further challenges.

This is a new experience for the Green Party, which has been experiencing what it’s like to be a conventional party in the past few months and the back-stabbing that comes with it.

The tight result will pose questions about the durability of Ryan as leader and whether he could steer the Greens through a full term in Government. With the Fine Gael and Fianna Fáil leaders swapping the role of taoiseach in December 2022, there is certain to be internal pressure in the Greens for a handover at that juncture.

The contest reflects a fault line that has been apparent in the party for some time but has deepened in the past year. There are two distinct groups in the party – in shorthand, the environmental wing and the social justice wing.

But when you engage proponents of either side, it quickly emerges that the underlying sentiments are not always as lofty and admirable. What you have is in many ways a faction fight, with some of the personality baiting we have seen when Fianna Fáil, Fine Gael and Labour have divided in the past.

In one of the recent leadership hustings, Ryan admitted the party had been “swamped” with complaints in relation to bullying. Sure there was a Covid-19 aspect. With a lack of opportunity to meet up, some of the debates ended up as WhatsApp shouting matches. But the medium can’t be totally blamed for the visceral stuff.

The Greens like to project an image of not being policy-focused, of not being beholden to personality. That image has dissipated in the past six months as a battle has played out between the two factions.

Over the past 24 hours there have been two other potent reminders of this split. The first was the setting up of a new affiliate group, the Just Transition Greens, which wants the party to become more active in the area of social justice.

In its first outline of its purpose, the group implicitly criticised the party for not connecting with rural and disadvantaged communities, styling itself as a green-left organisation. If you trace out the group’s core beliefs, it is not a million miles away from People Before Profit or Rise.

That has raised the possibility of a new green-left party in the future, but its founders have talked that down. In its introductory letter, it said its existence might prevent some from leaving the party.

However, that actually came too late for one of its 16 signatories, Saoirse McHugh, who announced she was leaving the party on Thursday, making good on her promise to do so if the Greens went into Government with Fianna Fáil and Fine Gael.

Mayo-based McHugh has a big cachet with younger members of the party who love her radical views and energy, but she irritates others who question her track record, and portray her as big on rhetoric but not on putting her shoulder to the wheel.

Some in the party may have hoped the conclusion of the leadership contest would bring unity as the party navigated the tricky waters of government for a second time.

Can it put all the rancour of the past few months behind it? You just sense that question has not been settled by this skin-of-the-teeth result.