Chinese Ambassador to Ireland: Videos of Uighur muslims in camps are ‘fabricated’ 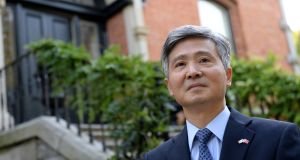 Chinese Ambassador to Ireland He Xiangdong has said fears over unrest in Hong Kong have been ‘exaggerated’. Photograph: Dara Mac Dónaill/The Irish Times

The Chinese Ambassador to Ireland He Xiangdong has said that reports about the restriction of civil liberties in Hong Kong and concentration camps for Uighur muslims in the Xinjiang region are exaggerated and fabricated.

Stories about Hong Kong have been exaggerated, he told RTÉ radio’s Today with Sarah McInerney show. There are limits to freedom, he said and any expressions of freedom of speech and assembly have to be subject to law and order and should be peaceful.

“A lot of the concerns expressed in the US and UK have been exaggerated.”

When asked about calls in Ireland to have the extradition agreement with Hong Kong withdrawn, the Ambassador said that the agreement was there to provide mutual assistance. “I don’t think many Irish people would like to see those rioters, who are terrorists, come to Ireland to take it as a safe haven for them.”

Mr Xiangdong also described videos showing members of the Muslim population in the province of Xinjiang, Uighurs in concentration camps as fabricated and edited for political purposes.

“A lot of those video clips are fabricated, edited for political purposes, too absurd, it is very unfortunate that people are basing their perceptions or judgements on those reports.”

The Ambassador said it was China’s position that these camps don’t exist, that they were not concentration camps.

On reports of the forced sterilisation of Uighur women, Mr Xiangdong said this was “just a fabricated, sensational story. If there’s any single case it would not be allowed, if there is concrete proof we will have an investigation.”

Stories about ethnic cleansing were “totally fabricated” because in the past 40 years the Uighur population was double that of the rest of China, he said.

Fianna Fáil senator Malcolm Byrne said the Chinese government’s allegation of fabrication was worrying and he was concerned that anyone extradited from Ireland to Hong Kong would face a farce of a trail and could be “spirited away” to mainland China.

Former Attorney General Independent Senator Michael McDowell said the Ambassador’s remarks were “deeply misleading and troubling” and that it was “blatantly untrue” that the stories on concentration camps had been inaccurate.

The fact that the Ambassador referred to the higher birth rate among Uighur Muslims was a matter of concern, he added.

Senator McDowell said that under Article 5 of the extradition agreement between Ireland and Hong Kong it was prohibited to extradite anyone for a political offence or on the basis of their political outlook.

“Our laws and courts provide that people on trumped up charges cannot be extradited.”

Senator Byrne added that he was concerned that China might try to use its economic might to apply pressure. It was important to stand up to the Chinese authorities as “the way they treat people Is not acceptable.”