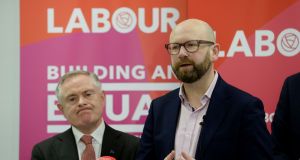 Labour finance spokesman Ged Nashdescribed the Government’s move on pay for super junior ministers as being ‘absolutely tone-deaf to the day-to-day needs of families across the country’. Photograph: Alan Betson/The Irish Times.

Opposition TDs have condemned the Government over the introduction of legislation to ensure that all three ‘super junior’ Ministers are paid an additional allowance of €16,288 for sitting at Cabinet.

The legislation is expected before the summer recess and Sinn Féin finance spokesman Pearse Doherty said the move “sends out all the wrong signals”.

Labour finance spokesman Ged Nash described the idea as “absolutely tone-deaf to the day-to-day needs of families across the country”.

During a debate on revised estimates of some €42.7 million for salaries and expenses in the office of the Minister for Public Expenditure and Reform, Mr Doherty hit out at Fianna Fáil.

He said that when the party was in opposition it said it was “adequate to have two super junior ministers and that it is not a matter for the Dáil to pass legislation to solve an informal Fine Gael demotion or promotion issue”.

Mr Doherty asked “what has changed” since then and said “we know that Fianna Fáil could never be trusted”.

“The only thing that has changed is that it is now the beneficiary of the super junior Ministry and the bump of €16,000,” he added.

Under current law two ministers of State who sit at cabinet are allowed an extra €16,288 annual allowance along with their ministerial salary of €124,439.

Mr Doherty hit out at the “priority of the Government” to introduce such legislation in the middle of a pandemic “when cancer patients cannot get medical cards, people are seeing their PUP (pandemic unemployment payment) being cut and students are wondering how they will get back to school”.

Mr Doherty and Mr Nash criticised the failure of Minister for Public Expenditure Michael McGrath to attend the debate. Minister of State Patrick McGrath said he was at a Cabinet meeting.

Tánaiste Leo Varadkar on Tuesday also missed a Dáil debate on enterprise legislation because of a Cabinet meeting.

Mr Nash claimed the Government had been creating its own mini-July stimulus package for itself with a “near-record 20 junior Ministers”, 17 special advisers soon to be appointed to work with the three Coalition party leaders and “now three super junior Ministers will receive an additional €16,000 each in allowances”.

He said “this is a very anxious time for families and businesses, but there is no sign whatsoever of the Government tightening its belt and acknowledging or understanding the pain and difficulty in which many people find themselves.”