Ciarán Cuffe has refused to be drawn on whether he would back the Green Party entering into a coalition with Fine Gael or Fianna Fáil after fellow MEP candidate Saoirse McHugh said she would quit the party in such circumstances. Video: Jennifer Bray 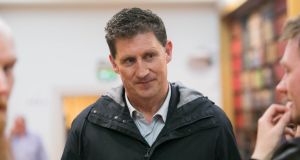 Eamon Ryan at the local and European election count in the RDS, Dublin. Photograph: Collins

Green Party leader Eamon Ryan has said he anticipates a “rainbow coalition with a range of different parties” in local government.

Speaking as local election results showed major gains for his party in a so-called “Green wave”, Mr Ryan said that the party would seek to prioritise housing and transport, seeking sustainable solutions that could be implemented by local authorities.

However there are already signs of tensions in the Greens over future political strategy, with European parliament candidate for Midlands North West Saoirse McHugh saying she would resign from the party if it entered a coalition government with Fine Gael or Fianna Fáil.

Green Party candidate for Dublin Ciaran Cuffe arrived into the RDS on Sunday afternoon and appeared in no mood for talking when questioned by journalists about his party’s plans for a potential future coalition with Fianna Fáil or Fine Gael. Asked about Ms McHugh’s comments he said: “I think she spoke from the heart and I admire that. These are all hypothetical questions. Let’s see how things go today and then we can have a look at all these issues.”

Asked for his own position on whether he would be happy to go into Government in such circumstances, he declined to answer.

Taoiseach Leo Varadkar said on Saturday the public had sent a “clear message” by electing more Green Party candidates that they want the Government to do “more on climate action”. Mr Varadkar said it had obviously been a good election for the Green Party: “I congratulate them”.

Mr Varadkar admitted Fine Gael had under-performed against its initial expectations in the local elections. He also downplayed the prospect of a Cabinet reshuffle on the back of the European and local elections, and said he will have to consider when to hold any by-elections resulting from TDs getting elected to the European Parliament.

On the local elections, Mr Varadkar told RTÉ radio Fine Gael will win an additional ten to 15 seats, but acknowledged this was short of the party’s expectations.

“It seems our vote is up slightly, maybe one, one and a half per cent and we will gain ten-15 seats, which is less than we had expected or hoped for, quite frankly but it still means that we are gaining seats and it is the first time in 20 years that a party in government has managed to gain seats in local elections and that is not a small thing, I don’t think,” the Taoiseach said.

“That is something we are going to have to give some thought to. We are gaining ground in both the local and European elections, but certainly in the local elections not as much as we might have hoped for. We need to look at where we did well. We did very well in some places like Tipperary where we have no Dáil seat or in Cork we were targeting gains.

“In Dublin the result was less than we had hoped for. If you looked at all the opinion polls for the last weeks and months, even the bad ones had us on 25 per cent in Dublin, some 30-35 per cent and we are well below that on the day so that is something we are going to have to analyse.”

Counting was continuing in local elections on Sunday and began in the three European Parliament constituency this morning. Counting for the Northern Ireland European constituency begins on Monday.

The Taoiseach said Fine Gael will take three seats, and may even win five when counts are completed in Ireland South, Dublin and Midlands North West in the next few days.

“Taking the European elections first, it looks like our vote is going to be up by about 7 per cent, maybe a double digit lead over Fianna Fáil. Votes up in every constituency. We definitely will take three seats comfortably and we are in the fight for two more and I wouldn’t call either of them just yet.”

He said Deirdre Clune, an outgoing Fine Gael MEP in Ireland South, has a “a battle on her hands, absolutely no doubt about that”.

On the issue of potential by-elections, Mr Varadkar said: “That is a judgement to be made at a later date again. Byelections have to be held within a six month period, so they would have to be held by the end of November.

“There are other factors at play. The instability across the water in relation to Brexit, we have to bear that in mind as well and also if we can get the votes to get a budget through. So that is something that has to be considered in the next couple of weeks. Those by elections do have to be held and held by the end of November.”

With many of his TDs and ministers speculating on potential Cabinet reshuffle, he said: “It is not something I am planning to do at the moment.”

At the RDS, Labour Party leader Brendan Howlin says he will be meeting the Green Party leader Eamon Ryan next week to further discuss the two parties forming a civic alliance at local level.

“I had very early discussions with the leader of the Green Party Eamon Ryan in advance of the election, and I actually spoke to him on polling day as well. I am going to meet him next week to see how we can look at the number of seats we have each and how we can work together to make an impact at local level.”

He said the party will increase its seats by 25 per cent in the locals but would have liked “a greater pace of increase but that was certainly impacted upon by the volume of Green votes.”

Green leader Eamon Ryan says that he will seek to work with all parties in local government to promote green and climate-friendly policies and goals.

Although Mr Howlin has said that he will meet with Mr Ryan with a view to establish a “civic alliance” between the two parties, Mr Ryan today made it clear that he expects a broader arrangement involving other parties, including Fine Gael and Fianna Fáil if possible, to

“We shouldn’t exclude any party,” he said.

Speaking about alliances on local authorities, Mr Ryan told The Irish Times that he anticipated a “rainbow coalition with a range of different parties”.

He said that the party would seek to prioritise housing and transport, seeking sustainable solutions that could be implemented by local authorities.

He said he would talk to Mr Howlin over the coming days about co-operation with Labour, but also said that the Greens new councillors on local authorities would take lead in forming alliances at local level.

“We can’t do it top-down,” he said. There has to be local leadership.”