Surge in support ‘different’ as Greens reinstate presence in Cork, Limerick and Galway 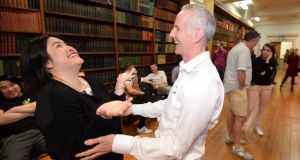 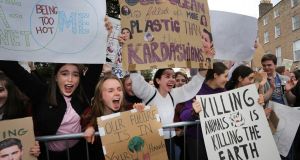 Pictured are members of the Schools Climate Action Network in Merrion Square, Dublin, calling on the Government to take action on the growing climate and biodiversity crisis. File Photograph: Extinction Rebellion Ireland

Election surges have happened before, but this time it is different. The Greens have more than quadrupled their number of council seats, have got back into major cities such as Cork, Limerick and Galway – and may yet celebrate three European Parliament seats.

Not everything about this rise is down to climate change, though it has been key. Hard graft after the 2016 election greatly strengthened the party internally, for example; especially in getting the policy and candidate mix right.

Equally, the Greens seized the momentum in the final week of the campaign, and maintained it with the help of Saoirse McHugh’s strong showing during the TV Midlands-NorthWest debate.

However, climate change lies at the heart. The Greens, along with climate NGOs, have helped to increase the public’s awareness, even though climate breakdown is a hard-sell, cursed by complex science and the perception that it is a “a future problem”.

The Oireachtas Committee on Climate Action (CCA), showed, if not deliberately, the Greens already had in place the best climate policies, displayed better understanding of climate science, and were the most persuasive on the need for urgent action.

Moreover, Friday’s elections have been about more than the Greens getting the last seat. Many topped the poll, even first-time candidates. “What will be really interesting is how does this change Fianna Fáil, and especially Fine Gael, ” says UCD environmental policy fellow Dr Cara Augustenborg, “Finally climate has become a doorstep issue that has translated into votes,” she said.she says, “They cannot “greenwash” and think they will get away with it.”

The science on global heating and accelerating wildlife loss has seen-off climate science deniers. A global movement that seeks to put the well-being of the planet and its citizens ahead of an obsession with growth is gaining momentum.

It is a broad-based movement, spanning across generations. However, it is strongest among those in their 20s and 30s, who are increasingly concerned about their carbon footprint, and are unlikely to abandon the Greens in the next general election since they are not loyal to old Fine Gael/Fianna Fáil politics.

The Green Party is no longer an eclectic mix of well-meaning eco campaigners who consume elderflower wine. It is no longer a one-policy party, Ms Augustenborg says. “They have an opportunity now to show they are not a one-trick pony.”

Yes for many, voting green is an easy way to signal virtue and they probably did not read the small print of their manifesto – notably on carbon tax. Some of things the Greens want will not be popular when they come, though in effect there is agreement in Oireachtas to proceed with increasing the tax.

The Green wave won’t be a passing fancy, says climate researcher Sadhbh O’Neill, who advised Independents during the Oireachtas inquiry: “If anything, the new era of climate politics is only beginning. The debate will reorganise itself around green issues, out of necessity and urgency if nothing else.”

But the Greens will find it hard in practice to change local politics, a system which is “designed to make politics singularly ineffective at this level, regardless of who’s in power”, Ms O’Neill told The Irish Times.

Funding and policies are controlled by central government: “It’s not obvious that the FG-led government is ready to relinquish any of its pet projects such as the road schemes in Project Ireland 2040 any time soon.”

Local authorities must change course quickly, she argues. Cycling and walking must get priority ahead of cars. Planning laws must be changed to cut the need for car transport and promote good quality, affordable social and affordable housing.

Equally, the “suburbanisation of the countryside” will have to be curbed, along with new out-of-town retail parks; while more support must come for public transport and EV charging points, she said. Despite the votes, some of this will not be popular, especially curbing new rural houses.

On the European front, Irish Greens if elected in coming days will be part of an influential grouping in the next European Parliament – one that will play a key role in counterbalancing far-right parties marked by populism, nationalism and climate science scepticism.

There, they will seek to strengthening the EU’s 2050 target of moving to net-zero emissions and shaping the next chapter of the Common Agricultural Policy – one to help sustain more family farms but also cut CO2 emissions.

Yet the steps to get there remain highly contested. The net-zero goal raises tough questions about the future for coal mining and car-making communities in Europe, and the sustainability of trade relations outside it.

On the home front, managing success will be a challenge. More Dáil seats will be needed, not just those on councils, but winning MEP seats will give it “the resources and the visible political presence to reshape Irish politics in the next general election”, Ms O’Neill says.

Nationally, top of its agenda will be recasting the National Development Plan because of a glaring shortfall in delivering emissions reductions and a reversal if the 2 to 1 ratio of roads development to public transport investment.