Restrictions on children changing their gender to be lifted 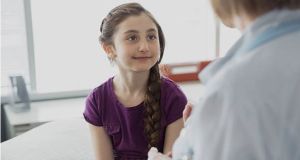 Under the existing legislation, children under the age of 16 are currently prohibited from accessing gender recognition, while teenagers aged 16-17 must go through a medical and psychiatric process before changing. File photograph: Getty Images

The Government is today expected to agree to remove the restriction on children under 16 changing their gender.

Minister for Social Protection Regina Doherty will bring a review of the 2015 Gender Recognition Act to Cabinet today, which recommends a number of changes to the current legislation.

The review report, written by Moninne Griffith, executive director of BeLonG To, proposes a move away from the present legalistic system to an administrative process.

Under the existing legislation, children under the age of 16 are currently prohibited from accessing gender recognition, while teenagers aged 16-17 must go through a medical and psychiatric process before changing.

The report recommends that all children under the age of 18 should be allowed to change their gender if they have consent from both parents.

Currently, those who identify as non-binary are required to declare as the gender assigned to them at birth

It states that courts should only become involved in adjudicating gender-recognition applications for children when a parent does not give consent or there is a concern about their mental health.

The report also contains a recommendation to produce a straightforward process if the child wishes to reverse that decision at a later stage in their life.

Ms Doherty is to ask the Government to accept the report and to produce legislation to amend the Gender Recognition Bill in accordance with the report’s recommendations. The Minister is said to be hopeful to have that completed and introduced in the Oireachtas in the autumn.

The Irish Times understands the report also recommends the State recognise those who identify as neither of the male or female genders.

Currently, those who identify as non-binary are required to declare as the gender assigned to them at birth.

Ms Doherty is understood to have been contacted by a number of groups seeking change in this area in recent weeks and is willing to examine the proposed changes.

The current legislation allows persons to apply through the Department of Social Protection for certificates to have the State recognise their gender. A total of 297 have been issued with gender recognition certificates since the law was enacted in 2015.

Campaigners have consistently called for changes to the law to allow for parental consent for 16 and 17-year-olds and restrictions on those under 16. They have to be assessed before hormone and other follow-up treatments.

Minister for Health Simon Harris is understood to be examining if that system should be maintained and is due to meet with various groups over the coming weeks to assess the need for change.

The review of the Gender Recognition Act is due to be published today after the Cabinet meeting.