Rent caps for purpose-built student accommodation to be introduced 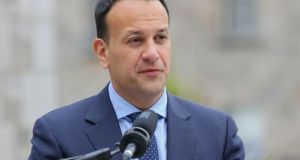 Taoiseach Leo Varadkar said about 3,000 new “bedspaces” for students have been built in the last two years, with a further 7,000 currently under construction. Photograph: Gareth Chaney/Collins

New legislation that will seek to prevent steep rises in rent paid for purpose-built student accommodation is to be introduced by the Government.

The move comes after both Fianna Fáil and Sinn Féin introduced private members’ motions in the Dáil seeking to cap rent for purpose-built student accommodation.

About 3,000 new “bedspaces” for students have been built in the last two years, with a further 7,000 currently under construction, Taoiseach Leo Varadkar said after a Cabinet meeting in Derrynane, Co Kerry, on Wednesday. Another 7,000 have been granted planning permission.

Mary Mitchell O’Connor, the Minister of State for Higher Education, is to work on Government legislation over the summer. Student accommodation is not covered by the so-called rent pressure zones, which cap rent increases to four per cent per year in designated areas.

This is because such accommodation is generally operated under licences and not as tenancies, as is the case with other rented properties.

“The rent pressure zones applies to tenancies but doesn’t apply to most student accommodation because that operates under licence,” the Taoiseach said.

Mr Varadkar acknowledged that the main Opposition parties had brought forward Dáil bills on the issue.

“As is the case with any Opposition legislation, particularly when you are a minority government, you have to respond when they are raised by the Opposition,” he said.

“And this is a real issue. This student accommodation is great, it is high quality, it is brilliant that we have it. But it is expensive and we saw in some instances prices hikes of 15 and 20 per cent this year which I don’t think anyone can stand over.

“What we don’t want to do though is throw the baby out with the bathwater. And the problem sometimes with legislation is that it goes too far . . . you might actually cause developers to stop building the student accommodation. The risk with the Opposition legislation is that their legislation might go too far,” he added.

The Taoiseach said the cost of staying in purpose-built accommodation can be “very high”.

“So we agreed to do two things. First of all, to promote digs and the rent a room scheme where there is a lot of supply and also to work over the summer on legislative proposals to limit the increases in the price of student accommodation.

“We’ll work over the summer on legislation, in some way, helping to limit the increases in student accommodation so we don’t next year see the kind of increases in prices that we saw this year.”