‘I’m not sure what they are playing at,’ says senior figure as Tuesday deadline looms 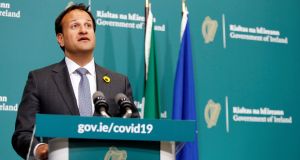 The Green Party has expressed deep frustration at delays in government formation negotiations, saying lack of progress has raised doubt over the prospect of an agreement being reached by Tuesday’s deadline.

The party noted three plenary sessions were cancelled on successive days this week, from Wednesday to Friday, preventing the full negotiation teams from meeting and stopping parties from signing off on agreed sections of the planned programme for government.

A member of the party’s five-member negotiation team said on Friday that progress at the talks this week had been laboriously slow and the response in relation to policy proposals had been sluggish from Fine Gael, in particular, and from Fianna Fáil.

Two plenary sessions have been scheduled for Saturday, but the negotiator said the party was now concerned that too big a backlog of issues had built up and there would be pressure put on the Greens to agree policies without exploring the issues.

“We are concerned that everything will be rushed and that other parties will then look to having detail and areas being absent from the final agreement,” said the negotiator. “That will not wash with Green Party members, who will look for detail in any agreement.”

“We are talking about a possible deadline of next Tuesday. If it’s left until the last minute, it’s not going to have the detail necessary for it to get through our members.”

There are now at least 10 papers backed up for approval at the two plenary sessions, to begin Saturday afternoon. However, many areas have yet to be agreed and there are some policy areas on which no discussions have taken place. They include areas such as political reform and mental health.

“On some other areas, there have only been half-formed discussions. They are nowhere near complete. There were some negotiations between spokespeople this week, and the three deputy leaders held meetings. But from our perspective it has all been disappointingly slow.”

The Greens say they have been briefed against for delaying the process but were confronted with a situation this week where the full negotiating team of five was ready to sign off on agreed text but then stood down on three successive days.

Another senior Green figure said: “We are not impressed with where it is right now because Fine Gael has postponed meetings. I’m not sure what they are playing at.”

Taoiseach Leo Varadkar explained on Friday the postponements were due to the rapidly changing situation regarding easing restrictions imposed due to coronavirus, which necessitated two Cabinet meetings this week.

“Over the weekend, party leaders will meet up to see if we can troubleshoot some of those unresolved issues. The timeline is to publish the agreement next week and then spend about two weeks consulting with our parties,” Mr Varadkar said.

A Fine Gael source later said: “There is a realistic prospect of agreement next week, maybe towards the end of next week.”

Teams from the three parties will discuss transport, coronavirus, mental health and drugs policy on Saturday morning, before plenary sessions begin in the afternoon.

Among the unresolved issues are housing and the use of public land (even though parties are close to an agreement on a land development agency); how to measure the 7 per cent annual reduction in emissions; ring-fencing 20 per cent of the transport budget to cycling and walking; and direct provision.

A senior member of one of the other negotiating teams said talks could not go beyond a fifth week as it would mean key legislation – including renewing the validity of the Special Criminal Court – could not be dealt with.

“The weekend will decide a lot. We will see on Saturday morning about how many documents will be put to the plenary in the afternoon,” the negotiator said.

“To be honest, the biggest hurdle at the moment is faith. The Greens need to look at the document in a ‘glass is half full’ manner and realise that it can be seen as a great achievement for them,” said the party figure.