Summer programme planned for 10,000 children with autism and other conditions 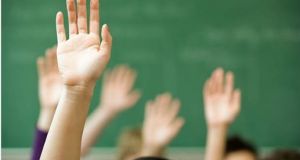 A memo is expected to be brought to Cabinet within a fortnight that would pave the way for school buildings to be reopened at the end of June. File photograph: iStockPhoto

Hundreds of schools may reopen at the end of June to accommodate a summer programme for over 10,000 children with special needs under a plan being developed within the Government.

The departments of Education and Health are understood to be working on a joint proposal to open school buildings at the end of this month to allow children with complex conditions such as autism, or who are at high risk of educational disadvantage, to return to school for July.

It would allow the children, many of whom have complicated needs, be reintegrated into a school setting before the new academic year begins at the end of August.

Groups representing parents have expressed concern that the longer their children are kept away from school and its routines during the Covid-19 emergency, the more challenging and problematic their behaviour will be when schools return. Schools have been closed since March 13th.

A memo is expected to be brought to Cabinet within a fortnight that would pave the way for school buildings to be reopened at the end of June.

In 2018, 10,150 children with special needs continued their education in school buildings during the summer months under the July Education Programme, also known as the July provision.

Government officials are understood to be examining the potential to expand the initiative beyond children with autism and intellectual disabilities to include children with special needs such as Down syndrome.

The preference is for a school-based programme that will allow pupils re-familiarise with school settings and with its routines. However, it is understood that home-based programmes are also being devised for some families.

If the scheme is given the green light by the Cabinet, strict protocols will have to be put in place to ensure that public health guidelines, including social distancing, are maintained.

In a letter to Minister for Education Joe McHugh last month, the head of the autism charity AsIAm, Adam Harris, argued that an early return to school for those with autism was essential.

“There is a particular concern that the longer a pupil is not attending school, the more challenging it will become to re-establish routine, and enable them to resume their studies and self-development,” wrote Mr Harris.

The July Education Programme provides funding for an extended school year for students with severe or profound intellectual disabilities and students with autism spectrum disorders.

The scheme was developed to reduce potential regression in learning associated with these specific groups.

If there are difficulties opening schools on public health grounds, Mr McHugh has indicated that online supports may be available for children.

Officials also hope to expand the scheme to include disadvantaged children, in particular young people at risk of dropping out of school. In the past, these children have received targeted support during summer months to keep them in contact with their schools.

Two deaths from Covid-19 were reported by the the National Public Health Emergency Team (NPHET) on Sunday. A further death was confirmed in Northern Ireland, bringing to 2,175 the number of people who have died from virus on the island of Ireland.