Gallagher tweet was fake news before term was invented 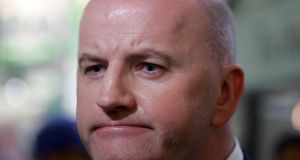 The tweet that downed Seán Gallagher’s 2011 presidential campaign was fake news before the term was even invented.

In late October that year, the presidential election campaign entered its final week. A slightly unexpected candidate – Gallagher – had emerged as the front-runner. Weekend opinion polls gave the former Dragons’ Den panellist a commanding lead: 43 per cent support compared to 26 per cent for his nearest rival, Michael D Higgins of Labour.

But in the final TV debate, before a live studio audience on RTÉ’s Frontline, Gallagher’s campaign went into meltdown. He had presented as an Independent candidate but his opponents accused him of being a proxy for Fianna Fáil (the party was then nigh-untouchable).

A poor performance on the programme by Gallagher was compounded by a false tweet read out live by presenter Pat Kenny, which wrongly claimed that a man had given Gallagher money for a Fianna Fáil fundraiser.

On Tuesday, Gallagher received what his solicitor described as “substantial” damages and an apology from RTÉ.

In its apology, RTÉ acknowledged the programme “fell significantly short of the standards expected by the public and required by law”.

There were other factors that probably caused Gallagher’s campaign to nosedive in the final week, but the damage caused by the tweet undoubtedly contributed to the demise.

Until that moment, the 2011 campaign was very personalised and brutal, with five of the seven candidates – Mary Davis, Dana Rosemary Scallon, Gay Mitchell, David Norris and Martin McGuinness – being subject to intense scrutiny which damaged their prospects. Michael D Higgins and Gallagher were the only two who had remained unscathed. Gallagher was leading in the opinion polls because voters, as David Davin-Power described it, seemed to like the cut of his jib.

The previous Saturday, a reporter from the Mail on Sunday had contacted the Gallagher team asking it had he collected €5,000 from a South Armagh businessman on behalf of Fianna Fáil several years earlier. Gallagher could not recall it. The story did not appear that Sunday.

The programme was broadcast on Monday night and was scheduled to last for two hours.

While Gallagher’s support team was doing its preparation work and scenario planning for that night’s debate, they thought the issue was over. However, McGuinness brought up the matter. He said he had been contacted earlier that night by an unnamed man, later identified as fuel merchant Hugh Morgan. Morgan, who had strong Sinn Féin connections, had claimed Gallagher invited him to a €5,000-a-head dinner in Dundalk with then taoiseach Brian Cowen and collected a cheque afterwards.

“Now this is indisputable. That’s an absolute disgrace and clearly shows the rottenness of the system,” McGuinness asserted.

McGuinness’s version was wrong. Gallagher denied he collected the cheque, but he was halting and unconvincing. “I have to say you are in deep, deep trouble,” said McGuinness.

There the matter rested for almost an hour. Then, after an ad break, Pat Kenny spoke of a development. He read out a tweet which had been sent from the @mcGuinness4Pres Twitter account: “The man that Gallagher took the cheque from will be at a press conference tomorrow.”

It reopened the matter and allowed McGuinness to stoke up the earlier attack. This time Gallagher referred directly to the man, disparaging him. In so doing he also made comments that had very unfortunate overtones for a man denying Fianna Fáil connections – including “no recollection” and “if he gave me an envelope”. Those phrases recalled excuses of disgraced Fianna Fáil politicians.

Sinn Féin quickly confirmed the tweet had not been sent from any party account. Its own official account for McGuinness was @martin4pres. Just after 11pm, it tweeted: “As official campaign twitter for Martin we need to point out that we have made no comment on the Gallagher FF donation issue.”

At some stage after the Sinn Féin correcting tweet – certainly well before the end of the programme – members of the Frontline team became aware of it. However, the correction was never broadcast, neither on the programme nor on the Pat Kenny Show the next day, when Gallagher appeared as a guest.

Later that day, when asked was the tweet not authorised by Sinn Féin, a spokesman texted: “No. Fake account. Not ours.”

After initially standing over the programme, RTÉ had acknowledged within a year that mistakes had been made. The Broadcasting Authority of Ireland upheld six complaints made against the broadcaster during 2012. An independent investigation was conducted by Rob Morrison, a former head of UTV current affairs, and by another senior broadcasting executive, Steve Carson. They did not question the bona fides of the Frontline team but were highly critical of editorial decisions and processes including audience selection, question selection, and the fact that Higgins was not forced to field any audience questions, while Gallagher faced three very searching questions.

Given all of that, yesterday’s settlement in favour of Gallagher was hardly surprising.