People Before Profit TD complains of eviction from constituency office 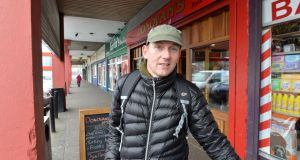 Gino Kenny: “They should have at least given me a month’s notice.” Photograph: Alan Betson

People Before Profit TD Gino Kenny has complained after he was evicted from his constituency office.

The office on New Road, Clondalkin, which the Dublin Mid-West TD has rented since May last year, was secured by a receiver, Duff & Phelps, on Saturday.

The loan holder is Promontoria (Aran) Ltd, the subsidiary of the US fund business Cerberus, which bought a multibillion loan book from Ulster Bank which was in turn linked to 5,400 properties in the Republic and Northern Ireland.

The TD was given notice on July 13th, said the receiver, adding that it had requested the property be vacated before 5pm on July 19th. The receiver took possession of the property, formerly Clare’s Pizzeria, on July 22nd.

Out of the country

Mr Kenny, who is out of the country, said he first heard about the problem last Monday and complained that the receiver had not given him enough time to get his affairs in order.

He said his landlord had previously briefly mentioned the existence of a dispute “with the banks”, but he said he did not realise the scale of the problem.

“I think it’s unbelievable. I got all these phone calls and messages saying the receivers are in your office, they have taken all your signs down. I’m flabbergasted. They should have at least given me a month’s notice.”

His landlord is seeking legal advice. The receiver’s appointment last February was contested and proceedings were issued: “I’m caught in between all of this,” said Mr Kenny. “It’s nothing to do with me.”

An order was issued by Mr Justice O’Connor on July 12th, last year, which refused all reliefs sought by the plaintiff, including the request that the receiver be restricted from dealing with the property.

While the decision of Mr Justice O’Connor has been referred to the Court of Appeal by the plaintiff, the receiver said no effort has been made by the borrower to obtain a stay on the order.

Duff & Phelps said it is therefore “entirely incorrect to suggest that the receiver cannot take possession of the property until the appeal has been determined”.

Representatives for Mr Kenny were given access to the premises yesterday so they he could remove items, while some items have been left and “they are due to confirm with the receiver when they would like to collect them”, it said.