Publication of Olympic ticket report to be decided by Cabinet 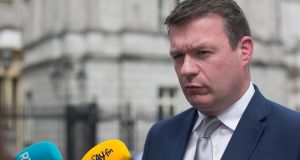 The “Craft Beer Bill” allowing breweries and distilleries to sell their products on their premises, originally proposed by Labour TD Alan Kelly, will be discussed at Cabinet. Photograph: Collins

Cabinet is expected to make a decision on Wednesday on the publication of the report into the Olympic ticket touting scandal ordered by Minister for Transport Shane Ross.

Former High Court judge Carroll Moran examined the ticket distribution process adopted by the Olympic Council of Ireland (OCI) from London 2012 to the 2016 games in Rio.

A spokesman for the Department of Transport confirmed the Attorney General’s advice had been received after one of the parties referred to in the report raised legal matters.

“The Attorney General’s advice has been sought and received in relation to Judge Moran’s report, and a decision on the publication will be made shortly,” the spokesman said.

The investigation was ordered by Mr Ross following controversy surrounding ticket distribution by the OCI at last year’s Olympic Games in Brazil.

Last month Mr Ross told the Dáil he wanted to publish the report at the earliest possible date but was awaiting advice from the Attorney General.

Meanwhile, the costs of the Disclosures Tribunal by Mr Justice Peter Charleton into alleged Garda malpractice around whistleblower Sgt Maurice McCabe will be also discussed at Cabinet on Wednesday.

Minister for Justice Charlie Flanagan is expected to outline the cost to date and projected future costs of the inquiry which is ongoing at Dublin Castle.

The last Cabinet meeting before the summer recess has a busy agenda. A significant piece of criminal justice legislation is also expected to be presented by Mr Flanagan.

A memo on legislation underpinning the National Children’s Hospital and setting it up as a statutory agenda, the Children’s Health Bill 2017, will be brought to Cabinet.

Minister for Health Simon Harris will not attend the Cabinet meeting as he is on honeymoon, so a colleague will present the memo.

Meanwhile, the so-called Craft Beer Bill allowing breweries and distilleries to sell their products on their premises, originally proposed by Labour TD Alan Kelly, will also be discussed.

Ministers will also be given an update on Brexit and the political situation in Northern Ireland. There will be an opportunity for members of Cabinet to discuss developments and put forward suggestions.

Taoiseach Leo Varadkar is expected to brief colleagues on the Government’s action plan for jobs.